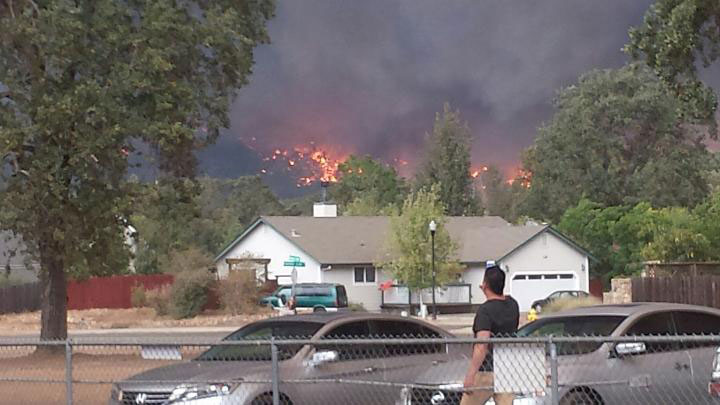 It has been nearly a year since a massive wildfire burned through Middletown in Lake County, California, enough time it would seem for some rebuilding and renewal. But the breadth of the devastation in this rugged area, says John Hamner, Callayomi County Water District (CCWD) general manager, has left seemingly irreversible scars.

“The day-to-day is challenging,” he says. “It’s not the same job it was before the fire. I would say that at least 30 percent of my daily activity has something to do with the fire aftermath.”

Many customers that come into his office, he adds, still suffer. They speak of symptoms related to post-traumatic stress disorder.

Moving on from the catastrophic blazes that left behind charred remains of houses and businesses in Middletown has not only been hampered by the fire’s scale, but also the nature of bureaucracy in cleaning up after such an event.

The fire completely destroyed CCWD’s office building and water treatment plant. Hamner’s engineer is waiting for FEMA to approve plans for the new building and plant redesign but it could take up to two years for that to be completed. Coordinating with FEMA, he says, has required diligence.

Of the 106 or so families and individuals who lost homes in the district, Hamner estimates that 10 are living in RVs.

“I would also estimate about 20 or 24 customers are rebuilding,” he says.

Hamner says he read in the Middletown press a few months ago that perhaps 50 percent of the town’s residents, as well as many in the neighboring town of Cobb, said they would rebuild their homes. The deeper story here, however, is one of financial ability and insurance. Both determine whether a homeowner settles a claim quickly, flees or rebuilds, says Hamner. Many, if not most, residents were underinsured.

For a small water system like CCWD, the lessons from the fire have been complicated and instructive.

Hamner says CCWD’s insurance company initially paid $80,000, which was deducted from the final settlement. This was clearly not enough to recover from the fire’s damage, but it did help in the initial days after the fire. CCWD has since received the balance of its $497,000 settlement, which will not cover its $2 million in losses.

“Shortly after the fire I realized that my insurance company was going to try and give me the lowest claim possible, so I hired a private adjuster who pointed out what I had suspected: we were drastically underinsured,” Hamner says. The adjuster suggested using his company’s services for 10 percent of an eventual settlement.

The adjuster helped better determine the losses, including the building, its contents and treatment plant. CCWD’s insurance policy covered the building, tools and generators, but didn’t include the filtration plant, piping, a dozen water meters, nor the entire loss of income.

“It has been determined, verbally at least and by multiple sources, that our losses were closer to $2 million,” Hamner says.

“All FEMA will cover is the building and the treatment plant,” Hamner says. “But on the plus side, they will fund ‘mitigation’ so that this never happens again, so I will be getting a block building with a metal roof and some sort of protection for my filters.” It will be another two years before a new building and water tank are built, he added.