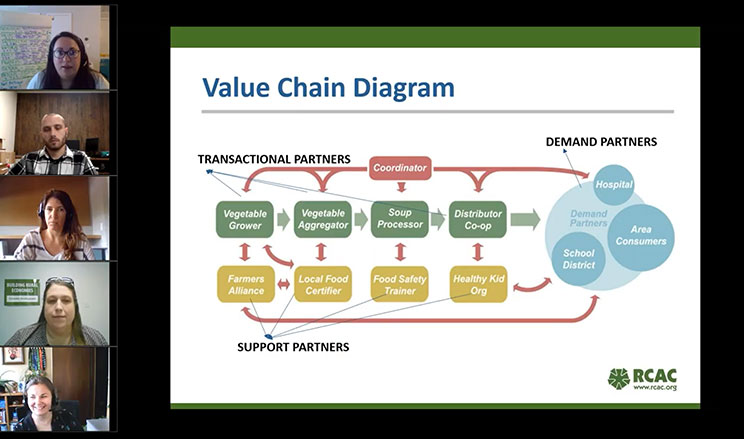 Rural Community Assistance Corporation’s Building Rural Economies (BRE) program has been a resounding success since it first launched in 2015. The BRE team served 30 plus communities; and their efforts generated millions in investments and created or saved hundreds of jobs. The team is known for its adaptability when dealing with diverse communities in the rural West.

This trait would be tested in 2020, as the BRE team found itself challenged, not just by every communities’ unique needs, but by the changing landscape of basic interactions in the wake of the COVID-19 pandemic.

“When COVID hit, we realized we weren’t going to able to launch those workshops when we originally wanted.”

In mid-2019, the BRE program received grant funding from the U.S. Department of Commerce Minority Business Development Agency. The funding allowed BRE to conduct the Recharge our Economy workshop series for several Tribal communities in rural Montana: Fort Belknap, Rocky Boy and Northern Cheyenne reservations. During the grant’s first six months, things went as scheduled as the team recruited participants and built relationships in each community. The BRE team was on track to begin the workshop series in March. However, in mid-March, severe travel restrictions were enacted nationwide, and many states asked citizens to “shelter in place.” Rural Development Specialist Amity Rembold was helping to coordinate the workshops at the time and says that initially the team hoped the delays would be minimal.

“When COVID hit, we realized we weren’t going to able to launch those workshops when we originally wanted,” Rembold says. “Not knowing how long this was going to last, we were hopeful we could do the workshops and maybe push the start dates back to May.”

Rembold chuckles at the thought now, remarking that as time went on, the reality set in that COVID-19 was far from a temporary event. Even when local ordinances eased, many Tribal communities, such as Montana’s Blackfoot Tribe, elected to isolate well into the fall as COVID-19 disproportionately affected them.

Seeking to reschedule the training for later in the year, BRE requested in June that the MBDA extend the two-year grant timeframe, which specified that the Montana workshops be completed before the end of August. MBDA instead asked if the team could explore virtual alternatives and still complete the trainings on the original schedule.

While BRE has never offered its workshops online, let alone in such a truncated period, the team agreed that it was an achievable goal if they moved quickly. An extra wrinkle in delivering virtual trainings would be the Montana Tribes’ very rural nature, where lack of access to reliable internet or even video conferencing equipment was a problem.

The BRE team arrived at a novel approach to the training. The team would take its existing curriculum and redesign it for shorter, more digestible modules that could be delivered via video. Instead of sending it electronically to the Tribes, BRE procured tablets and uploaded the modules onto each device before sending them to the Tribes. Alongside the tablets, the team created printed supplemental handouts and shipped them with assorted office supplies.

Rembold says that the modules were a great beginning, but the BRE team wanted to take it a step further.

“We knew that just using pre-recorded videos was not going to be enough for people to truly grasp and utilize these concepts. So, for each of the pre-recorded modules, we’re also conducting an online interactive session,” Rembold says.

To account for potential internet problems, BRE adopted a meeting platform that allows for call in services. Finally, the team created Facebook groups to facilitate personal interaction and offer a forum where people could interact.

With the plan set, the team faced the daunting task of implementing it all within mere weeks and enlisting help from other RCAC programs and departments in the process. For quality control, they formed a review committee to look at all the modules and give feedback. The committee was composed of community development experts and professionals from other RCAC departments such as Cortney Copeland, an RCAC fund developer. Copeland says that she brought some fresh eyes to the trainings, since she is a relative newcomer to RCAC.

“Our job was to watch all the prerecorded modules, read through all of the written materials, and actually be there for the online sessions. Then we could give feedback and notes and complete written evaluation forms,” Copeland says.

Copeland says she came away impressed by the modules and the speed at which the team made high quality videos, especially considering RCAC’s remote workforce. One of the many keys to this effort was Dustin Love, RCAC’s graphic design artist. Love received several hours of raw video footage taken from the various trainers, which he then edited and formatted on a fast turnaround.

“The Northern Cheyenne Community responded well to the workshops. We had a small group of dedicated participants who seemed excited, engaged and grateful to be learning the material.”

On the ground in Montana, the communities received 30 tablets, 10 per reservation, for those without access to the needed technology. Workshops began in July. While in-person BRE workshops often have weeks in between, the new format and timetable have required trainings every week. Rembold says that the team always knew the accelerated timeline would be a challenge, but an unanticipated one was the delay of COVID-19’s impact on rural America. As case numbers began to subside in early hotspots, Montana was one rural state to experience its surge later in the summer. Rembold said keeping the trainings focused and well attended had to be balanced with being respectful of the stress within the communities.

“Our community coordinator on the Rocky Boy reservation is facing fines for just leaving his home. These areas are just now beginning to see the first cases in their community. In the case of Rocky Boy, there were two deaths in a single week. It’s been a challenge to keep people involved and focused during this upheaval,” Rembold says.

The Montana Tribes’ community coordinators have helped with the module content creation process. Maddison Wilhite, the liaison to the Northern Cheyenne Reservation says that initial feedback on the ground is positive.

“The Northern Cheyenne Community responded well to the workshops. We had a small group of dedicated participants who seemed excited, engaged and grateful to be learning the material,” Wilhite says. “We did have a bit of activity in the Facebook group that indicated to me that people were thinking about the material outside of the 60- to 90-minute live sessions.”

Rembold says that this year, it’s hard to separate community development work from the pandemic. But the team used the crisis to highlight issues that need attention in rural communities, such as food deserts and the need for local food access, which becomes critical when reservations are locked down.

Rembold says as of now, there are no firm plans to continue the virtual workshops, but the team is keeping the content with the expectation that there will eventually be more out of necessity.

“On the horizon, there will probably be more virtual ROC workshops in other communities in the next six to nine months,” Rembold says.