More than one million Californians lack access to safe drinking water—a little known fact in a state bountiful in agriculture and renowned for its technological industry. For these Californians, the only alternatives to unsafe water are expensive bottled water or sugary beverages, and at a time when one in three Latinos and nearly half of California adults are pre-diabetic1. This is a particular concern as contaminated water is commonplace in low-income, predominately Latino communities in the state. 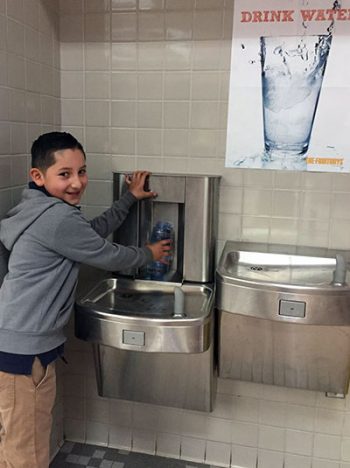 But a successful program offers a great solution. Initial evaluation results show that students in the Eastern Coachella Valley are drinking more water now that water bottle filling stations have been installed in schools, along with enhanced education to promote water’s benefits.

At Saul Martinez Elementary school in Mecca, “the number of ounces of water consumed per student per day more than doubled and, in some cases, more than tripled once the filling stations were installed,” according to RCAC and University of California, San Francisco. At both Saul Martinez and Toro Canyon Middle School in Thermal, the number of students per hour using the water sources increased and, at the latter, doubled.

Agua4All spotlights the lack of safe drinking water access in schools and communities, and encourages unique public-private partnerships to increase access and promote consumption. The idea is simple—install water bottle filling stations where they are needed most, such as in schools and community centers, and include water treatment where necessary. Moreover, the program advocates for sustainable long-term solutions to ensure safe drinking water for all. And it’s working.

The project has attracted national attention and enjoyed great success—so much so that it is now set to expand beyond the pilot areas, where more than 150 water-bottle filling stations were installed in schools and community locations during the past two years. At the same time, RCAC has installed more than 90 point-of-use (POU) arsenic filters in communities impacted by unsafe water to ensure public water sources and filling stations are dispensing safe water to residents. In schools where contamination is a concern, POU filters are on almost every water source, including ice machines and kitchen sinks, to ensure that the food students eat is prepared with safe water. 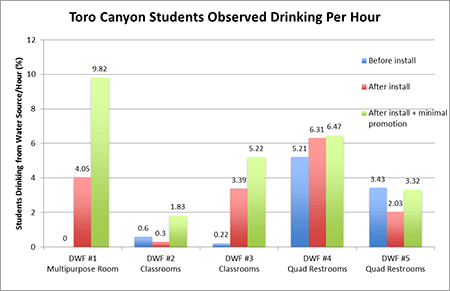 With more than $1 million additional funding for infrastructure, technical assistance and promotion, RCAC will expand Agua4All in Riverside and Kern counties and move into at least five new counties in California during the next year including Fresno, Lake, Merced, San Diego, and Tulare. These counties were chosen based on criteria including water quality issues, available monetary resources, existing relationships and disadvantaged community status, according to recent mapping done by California Environmental Protection Agency and Department of Water Resources. Water bottle filling stations will be installed soon in Planada and Le Grand in Merced County and in Upper Lake and Lucerne in Lake County.

Meanwhile, RCAC, partners and other nonprofit organizations have formed a drinking water coalition which advocated successfully for a $10 million budget allocation this year to fund safe water in schools and to identify water systems in California that do not meet safe drinking water standards. Nine and a half million will be available in the form of grants to school districts to fund water bottle filling station installations and water treatment where necessary. The remaining $500,000 will be used for technical assistance.

A more in depth study of water consumption in South Kern County is in its final stages and will be peer reviewed and published in the coming months.