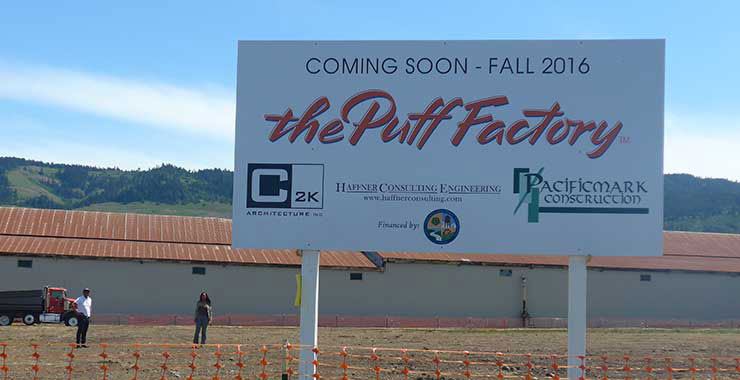 Hood River, Ore. – One uncommonly sunny morning in the valley that stretches from the Columbia River to imposing and snowy Mount Hood, Jacqueline Alexander walked among the Asian pear trees in her 40-acre orchard and picked up a sprig from the ground.

Twirling it in her fingers for a visitor to see, she pointed out what a casual observer—particularly one from the city—would likely overlook: the tiny branches all contain six fruit buds, but to grow the best pears, the branches need to be thinned so that they bear only one. In other words: quality over quantity.

Alexander readily admits she is mostly a city girl who faced a huge learning curve when she bought the 75-year-old pear orchard in 2006. Originally from Orange County, she attended University of California, Los Angeles and later Lewis & Clark College’s law school in Portland. In 2005, she came to the lush Hood River Valley for the first time and was so taken with the rolling hills, picturesque vineyards and breathtaking Mount Hood lording over it all, that she determined to find a way to live there.

A little more than a decade later, she has, and then some.

But it required years of physical labor and business planning. For instance, along with carefully trimming and thinning the pear trees in her orchard, Alexander describes how each pear must be wrapped in photovoltaic paper to protect it from the sun, blemishes and pesticides. The work didn’t end with the harvesting, for as her husband Lee describes it, when Alexander was starting out, she would “chase markets down,” even going so far as to send 33,000 boxes to Asian food stores on the East Coast.

And now she is embarking on a new venture. On May 7, Alexander broke ground on a factory that will freeze-dry pears that otherwise would be destroyed because they’re imperfect from inclement weather, insect damage or simply fell to the ground. About 15 percent of her harvest is imperfect fruit.

Until now, Alexander, like other growers in the area, has sold this culled fruit to juice producers at a minimal price. But it’s likely that her newly established company—Puff Factory—will solve this vexing problem, and moreover enrich the local economy.

“No one else is doing this in the United States,” said Alexander’s husband Lee, who was born in the Hood River Valley and grew up working in the orchards. “This industry is mostly in China. But Jacqueline did the math and really educated herself. She saw that she could do this.”

Starting a business from scratch, as any entrepreneur will tell you, takes not only smarts and patience, but also capital. For Alexander, part of her business development and success so far comes from a $5.3 million loan she received from Rural Community Assistance Corporation’s Loan Fund, which helped her start her business and get the equipment and facilities for it in place. The loan, combined with New Market Tax Credits, provided the necessary capital to fund the project.

Before that, she says, other lenders were reluctant to finance the factory. She estimates that once Puff Factory is up and running it should employ as many as 40 local residents.

“There used to be a lot of timber jobs here,” said Oregon Sen. Chuck Thomsen at the groundbreaking. “What you’re doing here is bringing promise back to the valley and putting people to work. You will be helping to keep our grandkids here.”

Along with supplying the pears from her orchard, Alexander will buy fruit from neighboring growers to process at Puff Factory. This will include strawberries, cherries, cranberries, apples from Washington and Oregon’s signature marionberries.

Already, interest in her novel business is booming.

The day before she broke ground on Puff Factory, Alexander was at a local entrepreneurs’ meeting that Oregon Gov. Kate Brown’s economic development staff also attended. After Alexander shared her story, Wes Ervin, an economic development professional in California and Oregon who was on hand to find out how local business owners could grow their businesses, told her, “You’re doing this very differently.” Most others interested in establishing a business like Alexander’s, he noted, would have puttered around in their kitchens and lobbied their friends to sample their wares.

“You’ve tapped so many resources, and just done an amazing job, it seems,” he said.

Alexander explained that early in the planning process, she was fortunate to find the Food Innovation Center (FIC) in Portland. Founded by both Oregon State University and the Oregon Department of Agriculture, the FIC has no comparison in the United States. It’s partly a laboratory for testing food preferences, but it also aims to combine food science with economic development.

“I was interested in developing a value-added product,” says Alexander, noting that initially, her plan was to produce Asian pear schnapps, a popular liqueur in parts of Europe.

Then her 10-year-old twins Morgan and Alexander suggested she make candy instead. Their mother had seen freeze-dried fruits before but started to think about how she might market her own invention. The timing was right, as more Americans are looking for ways to snack healthier.

In 2008, as Alexander was still mulling over her plans, the thought of building a freeze-drying facility seemed overwhelming, both in cost and labor. With help from the U.S. Department of Agriculture, she conducted feasibility and marketing studies, considered capacity and how much she could actually produce. Through her research she found that if the factory was located in Odell, near Hood River and her orchard, she could get New Market Tax Credits.

She would go on to invest three years of her time and $2.5 million of her personal financial resources to research and develop the so-called “puffs,” which resemble space food, in that they have a drier texture than preserved fruit.

“I had tremendous support, which allowed me to go from 0 to 100 in just three years,” Alexander says.

According to Dr. Qingyue Ling, FIC’s senior development engineer, the technology preserves both the fruit’s original flavor and its nutrition. The dried fruit also has a 20-year shelf life, is lightweight, easy to ship and has been shown to bake well in cakes and muffins.

Alexander settled on the product name “Know Your Fruit,” and had attractive logos and packaging designs developed, all of which were on display during the groundbreaking ceremony. Puff Factory is set to open later this year.

Along with local government leaders, long-time family friends—including Her Excellency Claudia Fritsche, Liechtenstein’s ambassador to the United States—and business associates, Alexander’s twins attended the Puff Factory groundbreaking. They sat quietly before the podium where Alexander and others spoke of the years of hard work and dedication. Noting that her children’s names—Morgan and Alexander—combined now make up the name for her Morale Orchards, she also gave credit where it was due.

“If not for their suggestion,” she said, “we wouldn’t be here today.”