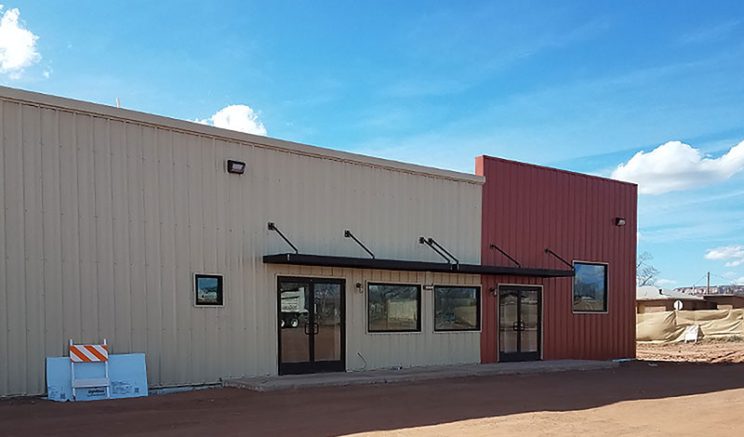 On the Zuni Tribe Reservation in New Mexico, a construction project that was years in the making is near completion. A Zuni family will own and operate Major Market, a local marketplace. About 85 percent complete, the market will open in June “no matter what” according to the owner, Darrell Tsabetsaye.

Construction began on the new Major Market in September 2019 and despite the COVID-19 pandemic, construction crews are considered essential workers and have continued to work. Tsabetsaye says he is present every morning to make sure they are wearing proper personal protective equipment.

Stepping up during COVID-19

He is also working with his food suppliers to make sure the shelves are stocked opening day. Major Market’s opening will provide food relief, which spares Zuni from huge travel times to Gallup or Albuquerque just to get groceries. Tsabetsaye says that the community needs local food options now more than ever.

“The Pueblo itself has self-quarantined, so it’s making it hard for us to travel to stock up on everyday needs. We’re scrambling. For a couple of the local stores, they either ran out of stock or they doubled their prices,” he says.

Major Market already supports a community food pantry for Tribal elders on the Zuni reservation with the supplies it has. The Tsabetsayes also stepped up to serve meals to the New Mexico healthcare team from a local hospital that sent a mobile unit to test Tribal members for COVID-19. Major Market provided 60 meals each day to the healthcare workers.

Major Market represents a culmination of his family’s journey. The Tsabetsayes previously owned a convenience store, also called Major Market, on the reservation. It was a labor of love for many years, barely profitable and in constant need of upkeep. For years, Tsabetsaye himself only drew a $50 bi-weekly salary. Slowly but surely, the market turned the corner and became a staple in the Zuni Pueblo. But despite financial success, Tsabetsaye felt defeated. With his building on a lease from the Zuni Tribal Government, he feared he would never truly own Major Market. He sold it in 2004 to a competitor.

Now, more than a decade later, Major Market is returning with a new building and a fresh concept. For the larger Zuni community, the new Major Market will be a big boost to the local economy. Unemployment is high on the Zuni reservation; 2010 Census data places it at 20 percent but Tsabetsaye estimates it is much higher today. This comes with other challenges in the community, such as a higher birth rates and substance abuse. According to Tsabetsaye, only three of the 20 storefronts on the Zuni Pueblo are Tribally owned. Tsabetsaye sees valuable capital leaving the community, rather than reinvesting in its growth.

Census data from 2017 showed that 35 percent of households on the Zuni Reservation lived below the federal poverty level. Another 25 percent did not have health insurance. Tsabetsaye laments that while the Tribe needs examples of successful members in the community, for many the ultimate goal is to leave and never return. It’s a point of pride that his children have returned to New Mexico to help run Major Market. The Tsabetsaye family plans to keep their money in the community in a way that big chain stores would not.

Speaking on a 2017 podcast episode of Beating the Odds, Tsabetsaye said,

In the earlier Major Market, we sponsored everything from Little League teams, to Toys for Tots, to providing Thanksgiving meals to some of the people who were less fortunate. We made deals with our vendors to give away 200 turkeys leading up to Thanksgiving and Christmas. After I sold the company in 2004, to where we are today, no other business is doing that anymore. So part of my game plan is to reintroduce that into the community.

Replacing a national chain store that came before it, Major Market will have an emphasis on healthy, organic food offerings. More than a grocery store, the market will offer a deli, smoothie bar and even supply local Zuni schools with fresh food. Tsabetsaye describes it as a Whole Foods concept, and his own children will help create the menu and source the food.

“I decided to do that because of issues within our Native communities of Tribal members having health issues like obesity, high blood pressure, diabetes and the like. But there are no product offerings locally. Most of the community have to drive 40 miles up north, to Gallup,” Tsabetsaye says.

The loan is a result of RCAC’s ongoing partnership with Confluence Philanthropy. Confluence is a membership network of private, public and community foundations working together to create values-based investing. Confluence created the Rainmakers Investment Collaborative (RIC) to focus specifically on expanding Tribal investments in Arizona and New Mexico. RCAC, in its role as the RIC’s Intermediary partner, manages the fund and deploys loans to qualified borrowers.

Tsabetsaye says RIC was critical in securing the initial capital he needed to get the Major Market project funded. Like many Native owned business endeavors, Tsabetsaye had difficulty getting capital from traditional banks for his business. Because the property was located on a reservation, banks would not be able to repossess property in the event that Tsabetsaye defaulted on a bank loan, which made them reluctant to loan him money.

Beyond the initial RIC investment, RCAC also provided two bridge loans to keep the project moving. The first was a $544,000 business loan, which suffered a long delay while the Bureau of Indian Affairs processed the guarantee. This forced Tsabetsaye and his family to purchase needed equipment on credit cards. RCAC’s Loan Fund stepped in again to provide a $52,250 bridge loan for the Tsabetsaye family.

Major Market is just one of the many investments RIC is making in the Southwest. RCAC community development loans available for Tribes in Arizona and New Mexico