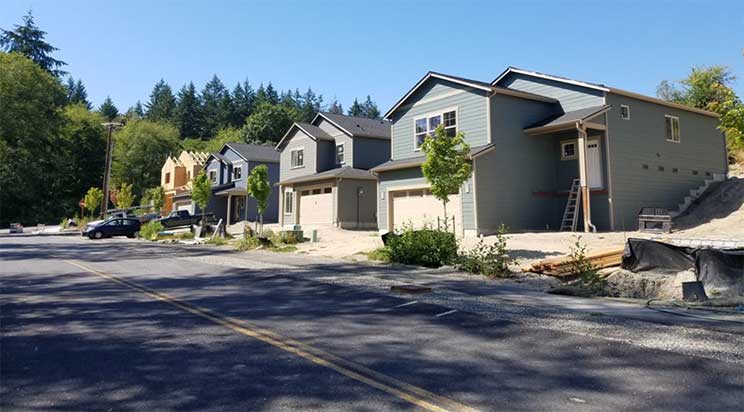 Prior to working as a general contractor on Bainbridge Island since 1986, Ted Francis worked in construction for 22 years in Alaska. He knows his way around a jobsite. So, how did Ted find himself building a home with the self-help housing program all these years later, now in his 70s?

In 2008, as the housing market collapsed, Ted’s world began to drastically change. Suddenly, he needed to find more steady work with benefits. Not only was the construction site slow, Ted and his wife had just suffered the loss of twins in utero after five months of development. As if the grief was not enough in an already trying, financially unstable time, this was also the moment that generated another life-altering change. The surgery Ted’s wife underwent to remove the twins ended in a perforated uterus leading to the spread of Hepatitis C throughout her body; at that time, an incurable virus.

With nothing short of luck and hard work, Ted secured a position as a long-haul truck driver at Watkins & Shepard that provided just what they needed—medical coverage and stability. For seven years, Ted’s wife, with him by her side, tested hundreds of thousands of dollars in treatments that her body was non-responsive to. For seven years, Ted drove long-haul trucks through what he describes as, “a brutal business.” It was not until just two years before she passed that a cure was developed. Unfortunately, after such a long time of suffering and deterioration, the cure was not able to bring her back to full-fighting strength. After seven years of struggling, Ted’s wife passed away. It was then his world flipped upside down once more.

Ted left the trucking company, sold their family home on Bainbridge Island and began to look at other homesteading options to start his life anew. His goal was to find an inexpensive place to retire. He was looking into options where he could use his life’s experience to build his own home when he came across the U.S. Department of Agriculture Rural Development Mutual Self-Help Housing program in Kitsap County.

… Ted has settled into his forever home in his quiet neighborhood of people he now knows, trusts and loves.

He gave Housing Kitsap a call. A young woman answered, sharing all of the program benefits and how it would be an interesting opportunity for him. He was not quite convinced but called again to learn more; there had to be something to it. It turns out, the self-help housing program was exactly what Ted was looking for and the next neighborhood’s “location was awesome,” Ted said, “…  and the fact that I could have a house that all I see was woods.”

“And,” adds Ted, “interest never sleeps … [the low interest rate] was a real attractive carrot. My payment would have been double what I’m paying now with a conventional loan. Now I’m living off social security and if I want to do extra fun things, I need to make money on the side to pay for it.”

Fast forward to the construction process. Ted’s group was informed that there was a construction delay in the current build group and his group would have a delayed start. While he understood, Ted was anxious to start. He decided to volunteer at the current build until completion, ultimately resulting in an earlier start time for his group. Then the real work began.

Ted recalled the first month or so of his group’s build to be “a real learning experience for me trying to teach other homeowners to build.” He used his contracting and building knowledge to assist the site supervisor, Joe Guseman, in guiding the build group as an additional leader on-site. As he admired the optimized building system making the process easier for people without prior experience, Ted also admired the tenacity and motivation his build group had to learn, grow and get the job done right. “We kind of worked our way into a system and that system worked out well,” Ted boasts. “We had different ‘crews’ working on tasks they were good at. [Group members] Caitlin, Sara and Tammie Jo worked on trim and installed all the trim. I’d hire them in a minute.”

Ted went on to praise his group members and how hard they work on site even after a hard day of work at their day jobs. He started offering a weekly Thursday night pizza and wine gathering to take one night of the week to reset. He smiled and said, “We still do that.”

Alongside this longstanding tradition, Ted has settled into his forever home in his quiet neighborhood of people he now knows, trusts and loves. He recalls move-in day thinking to himself, “Thank God it’s over. We were anxious to be done. I moved in my bed, EZ Chair and TV and slept here that night. Then it was just like home.” Ted is enjoying his retirement walking down to the library and senior center nearby, visiting with his five kids and six grandchildren, looking forward to his son’s 40th birthday party in Mexico next year, watching the resident backyard owl and taking the occasional side job building for friends.

“I’ve become really good friends with everyone here. Our groups worked fantastically. We still all get along. We stop each other on the street to say, ‘Hi’,” Ted said. “You get to build a community out of it. The program itself is great. I have no illusions of what [self-help housing] did for us. Without you doing what you do, this wouldn’t exist.”

No matter what life brings, no matter how the road winds, self-help housing may be just the solution a person needs to start a life anew.