Going it alone, working together: Anita LaRan and a lifetime of service 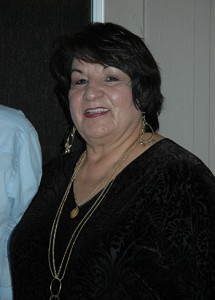 Anita LaRan returned to her childhood home in New Mexico’s Mora Valley in 1984, recently divorced, out-of-work and with three adolescent children in tow. By all accounts, it should have been a low point in her life, a sure sign of failure and desperation.

But if you think that, you don’t know Anita, whose legendary and no-nonsense skill at turning lemons into lemonade has impressed Mora locals for decades, as well as national leaders who’ve worked alongside her on projects, such as community building, environmental conservation and gender equality. She has been, in effect, Mora’s Forrest Gump, always at the ringside of social change in one of New Mexico’s poorest counties – or, perhaps more accurately, in the ring battling it out for the team.

“My ex-husband once told me, when I left him and returned to Mora, that I was just going to become another welfare statistic,” says Anita. “But I was raised to be strong, independent and accountable. And I’ve also grown during the biggest challenges in my life.”

For Anita, it is the culmination of what she has excelled at during the past 30 years: networking, fund raising, coordinating, presenting, imagining, convincing, cajoling, negotiating, and sometimes simply waiting patiently. She has attracted millions of investment dollars to Mora, served on dozens of local, state and national boards focused on rural America, advocated for main street projects, a livestock growers’ association, transportation, senior and youth programs—the list is endless. In a sense, that suits her, spurring her on to bring even more to the Mora Valley, including national attention as its county commissioners staved off oil exploration in the nearby plains and found themselves in the middle of a landmark anti-fracking court case. She was on RCAC’s Board of Directors for 12 years, winning accolades from fellow members for her insight, engagement and experience.

“Anita LaRan’s lifetime of service to her community, and involvement in numerous efforts to improve Mora County is exactly the volunteer work we want to recognize with the Yoneo Ono Award,” said Stanley Keasling, RCAC chief executive officer.

As a fifth generation Mora Valley native, born in Holman and with Picuris and Apache ancestry, Anita says she had the best teachers in her parents. No matter how busy they were with their farm and raising their children, they made time to always find out what was happening in the broader community, and to offer help.

“They were the best example. They were my role models,” she says.

In 1966, she left Holman to attend college in Albuquerque, seeing it as a ticket out of the hard physical labor she watched her parents endure. She later married, moved to California then onto Nevada, where her husband worked in the uranium extraction business. They later moved to Grants, New Mexico, but nearly 20 years later, she was back where she had started.

“I came back partly because I felt it was the best place to raise kids,” she recalls. “I told my children, ‘Look, out here, there’s not as many people, so you’ll have less competition in sports.’ We also didn’t have TV back then, so there just weren’t that many distractions.”

Her father died just two months after her return. She ended up taking over the family farm, but she would be hard-pressed to make a living for herself. In the autumn months, she gathered pine cones in the nearby Sangre de Christo Mountains, and fashioned them into wreaths and candle holders to sell at flea markets for the Christmas season. She hawked furniture from the five-bedroom home she had left behind in Grants, New Mexico.

“I was so resourceful,” she says, laughing at the memories of those lean months. “I learned to survive.”

She ended up getting a part-time job with Mora County, and her focus turned toward housing rehabilitation for the elderly. It was a fortuitous period, as she learned the ins and outs of local government, and how to build grant applications and political support. “I started out by asking a lot of questions,” she says.

However, in 1987, she says that the county commissioners queried her about rehabilitating a house that belonged to a relative of one of the commissioners. She recognized a conflict of interest, told them so, and refused to participate in the project. She was fired on the spot, but she adds that there were other threats, the worst being sexual harassment in the county offices. She filed a lawsuit against the commission and won.

Several years later, she was once again a civil servant. And it was then, while working with Helping Hands, a local non-profit, that she applied for – and got – a grant for $3,000. The funds would go toward community outreach, strategic planning and an objective near and dear to her heart: women’s health and domestic violence prevention.

Woman of the year

It was the first stepping stone, she says. Next came a grant worth close to $3 million after Mora was named a “Federally Designated Enterprise Community.” No surprise that that same year, 1994, Anita was named New Mexico’s Outstanding Woman of the Year, and she also was offered membership in the Rural Development Leadership Network based in New York. The following year, she traveled with a delegation of women to Beijing, attending the Fourth World Conference on Women, where she heard Hillary Clinton speak and participated in round table discussions and workshops on international women’s issues

“This was all at a time before computers and email, so to work in community development and to put together grant applications wasn’t as easy back then,” she says. She can recall shuttling between Taos and Santa Fe, meeting with collaborating partners, picking up and faxing documents back and forth.

During the years, Mora’s economy has swung like a pendulum. Today, unemployment hovers at around 17 percent and one time climbed to 30 percent. Anita’s projects have reflected that, and slowly multiplied. There was the Sangre de Cristo Valley Livestock Growers Association, a collaboration with Heifer International that funded 12 Mora families to purchase and raise pedigree cattle and sheep and sell beef as an added value full-scale farm business. There was the Los Mora Local Growers co-op, whereby farmers contracted to sell greens, chickens, and eggs at a health food store in Taos.

South of Mora, there’s the picturesque Salman Raspberry Ranch consisting of acres of pesticide-free raspberry fields, where visitors can pick their own fruit. The operation created some 15 jobs.

There also was Casa de Teresa’s Tamales in Holman, considered the best in the region. Teresa first started out cooking from her own kitchen for family and friends. But her talent was too good to keep secret and soon enough, she was in talks with Anita and the group Mujeres Unidas to expand her product to other markets. Anita connected Theresa with Taos County Economic Development Business Incubator where she was able to do large-scale production of her product. Theresa later opened a restaurant along Highway 434. Anita recalls that at one point, Teresa discovered that a business partner had been embezzling from her.

“We supported her through that,” says Anita. “I told her that she should learn from that mistake. The important thing is to avoid making them twice.”

The next step would be to create a “Product of Mora” brand, based on the Economic Development Strategic Plan for Mora County, which takes into consideration agriculture, tourism, water and natural resources and expanding broadband in the region.

But it’s when talk turns to Mora’s youth that Anita becomes most enthused. She helped establish the town’s first School Health Center and Drug Free Zone Schools and developed substance abuse   prevention programs, as well as School-to-Work curricula and Welfare-to-Work technology labs. Training the next generation of community leaders is a top priority.

“I call them ‘my cats,’” she says, referring to the Mora Youth Community Action Team. She has staged mock elections and encouraged public speaking exercises. Ideally, once they gain leadership education and experience, these young people will use their skills to help rural communities.

“These days, with telecommuting, there are many more new opportunities,” she says, adding that many of her charges have gone on to earn masters and doctorate degrees.

In 1988, Anita married her high school sweetheart, Donald. She says he is her biggest cheerleader; as a Vietman war veteran, she says, he fully understands what it means to serve.

“A lot of people would love to do what I do, but can’t afford to,” she acknowledges. Someday, though, she also knows, she will not be able to keep up with everything she does now, though her husband teases and praises her in saying, “If you don’t do it, who will?”

He also regularly prods her to buy a new car, out of concern that the one she has will soon break down. Laughing, she says, “Since moving back to Mora I’ve run all of my vehicles into the ground.”

All photographs were taken by Elizabeth Zach