Lalitha Vish farms a small plot of land in the heart of Silicon Valley and imagines she may be the envy of many held captive in unending traffic and demanding office jobs.

No doubt about it, she loves her work, evidenced by her regular and enthusiastic Facebook posts featuring vibrant Italian and Asian eggplants, shiny and shapely yellow peppers, rosemary and rosehips, all from her Jellicles Farm.

“I understand the romanticism of farmers markets sprouting up overnight and once a week, with the white tents and free samples. But is this really practical?” —Lalitha Vish

And yet she set off a firestorm in August on a San Francisco Bay Area-based online chatroom called FarmsReach, when she launched into a negative assessment of farmers markets. For a small farmer such as Vish – her rented land encompasses 1.5 acres in Sunol – the ubiquitous open-air markets would seem to be a boon, a chance to personally connect with customers, and show off and sell the hard-won harvests.

As her opening salvo, Vish wrote, “I am increasingly frustrated by the design of farmers markets … who else is with me?”

She continued, “I understand the romanticism of farmers markets sprouting up overnight and once a week, with the white tents and free samples. But is this really practical?”

Dozens of fellow farmers’ responded during the following weeks. They expressed devotion to the soil, but perplexity with how to make working the land profitable – and sustainable – these days, aside from selling to supermarkets and restaurants.

“It’s probably best for most small farmers to consider a transitional period where outside income supplements farm income.” —Jason Wehmhoener

She later also directed her readers to an October 2014 Modern Farmer magazine story about so-called Farmers Market Fraud, or FMF, and suggested that financially strapped farmers felt desperate enough to commit it.

In the chatroom, thoughtful observations and commentaries on labor, processing, value-added production, marketing, infrastructure, credit and investments, all painted a complex picture of agriculture and where it might be headed, for better or worse.

“In our family, we are funding our farm through savings from our prior (and ongoing) careers as software designers,” wrote Jason Wehmhoener, who runs Birdsong Orchards in Watsonville, California. “It’s probably best for most small farmers to consider a transitional period where outside income supplements farm income.”

A few weeks later, he expanded on this thought, and was more circumspect, writing, “I think a lot of folks look at the significant complexity of forming and sustaining a micro-farm co-op and look at the challenge of simply being a large enough farm that the economies of scale start working in their favor and either opt for the latter or throw in the towel.”

Participants cast about for more effective marketing methods and possibly enlisting larger operations to help smaller ones. “A farmer may grow excellent produce, but growing and selling produce are two different skill sets,” said Eric Harvey in a phone interview referencing his comments. Harvey has worked at Our Table Cooperative in Sherwood, Oregon since January. He added, “Many small farms are effectively operating a vertically integrated business managing production with sales, often via multiple channels, marketing and distribution, which doesn’t always make sense on a small scale. We created a multi-stakeholder cooperative in which ownership is shared across three different classes: farmers and other worker members of the co-op, regional producers (i.e. the farm nearby that produces the beef and pork that we sell under our label but don’t produce on site) and consumers, with the goal of sharing risk and rewards.”

Harvey said that in spite of the difficulties farmers face today, he is also sympathetic to the consumer.

“I understand the convenience of a supermarket,” he said. “We are a small cooperative community grocery store where we sell mostly organic and locally sourced products. Those are important values to us, but luckily, it’s also what the community we serve has said is important to it.”

Dana Smith of FarmAppetit in Granite Bay, California, agreed – so much so that she set about finding a concrete way to help farmers advertise their wares, which would also help the consumer shop.

“In my spare time, I have developed mobile apps for farmers with the intent to have a platform for promoting and selling locally through push notes and social media avenues,” she said. “This can be coupled with going to farmers markets, but it has a longer ‘shelf life,’ is always active and is ‘always on.’” 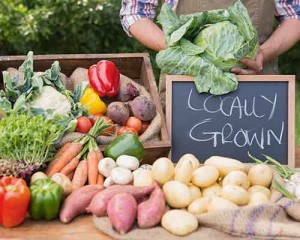 Citing long-standing farmers markets like those in Davis, California, and Ithaca, New York, Ken Kimes, who has been farming in Aptos, California for 30 years, encouraged more farmer involvement but acknowledged that once the markets are successful it can be difficult for beginning farmers to take part.

“In Santa Cruz County, we are lucky to have farmers markets that were organized by farmers (in 1975 and 1989) and remain aligned with farmers’ interests,” he wrote. “That is, if you are lucky you already have a spot there, because they are essentially closed to new farmers. It cuts both directions.”

The discussion participants on Vish’s blog also weighed in on labor and solvency matters and how to operate their farms in a rural economy that does not necessarily encourage fairness.

“I find that providing labor full-time with benefits is the right thing to do,” Vish wrote. “I don’t believe in free labor or volunteer labor as part of any business plan, but to avail cheap and reliable labor, something’s got to give.”

Nancy Reese Smith of Shone Farm in Santa Rosa, California, commented, “I have been thinking about pooling with neighboring farms to buy a portable commercial kitchen for value-added products. Might as well extend the idea to work together to meet the needs of the community, not just for produce, and value-added products, but also for eggs, meat, milk and cheese. The closer we could come to replacing supermarkets, the better.”

Therein lies the rub. The participants believe the economic model for farmers markets could and should be adjusted but expressed caution about too much refinement.

“I’m not a fan of farmers markets,” wrote Paul Underhill of Terra Firma Farm in Winters, California, “ just remember… they don’t pay rent on those streets or parking lots they use, they have no permanent infrastructure to maintain, no utility bills. They are charging you $40-$200 for your stall, which sure seems expensive unless you think about (how) much they would charge you for a permanent space. A permanent farmers market starts to seem an awful lot like a… grocery store.”

This idea occurred to Helmut Klauer, a farmer in Gaviota, California, years ago. Commenting on the thread, he noted that, for years, he set out produce on a wooden table outside his farm and let his customers use the honor system to pay. Alongside fruits and vegetables, and a list of prices, he set out an empty barrel for customers to deposit their payments.

“I’d rather be on a farm, farming,” he said during a phone interview. “And the fact is people who stop at produce stands don’t steal produce. People steal things because they want to resell them. Who wants to resell a head of lettuce?” He said he once put out hand-made candles on the produce stand. Those were stolen.

“A few times,” he continued, “we did actually take an inventory, to see how much we had earned. There was more money there than what (produce) had been taken. I frankly think people felt so honored that their honesty was being respected.”

Tony Lee, CEO of Fresh Nation, an online company that connects farmers market vendors with consumers, contributed to Vish’s thread, and thinks she is onto something.

“People love farmers markets, and you never hear a bad word about them, but often they lack resources,” he said by phone from his Stamford, Connecticut, office. “Many of them are run by volunteers and need more help with their business model, such as more access to customers and efficient marketing.”

The farmers all seemed to agree that the popular public markets they participate in could be improved, and most seemed to favor a permanent structure, an idea Vish mentioned in her initial posting to the forum and then proceeded to flesh out for weeks afterward.

“A marche couvert is a permanent structure with all the amenities for running a farmers market, with stalls that can be rented to farmers or food people,” she wrote, adding that for smaller vendors, just shelves could be offered. “The amount of fossil fuels and wastage and time and labor and wages spent on farmers markets doesn’t compute to me. Most importantly, it (a perma