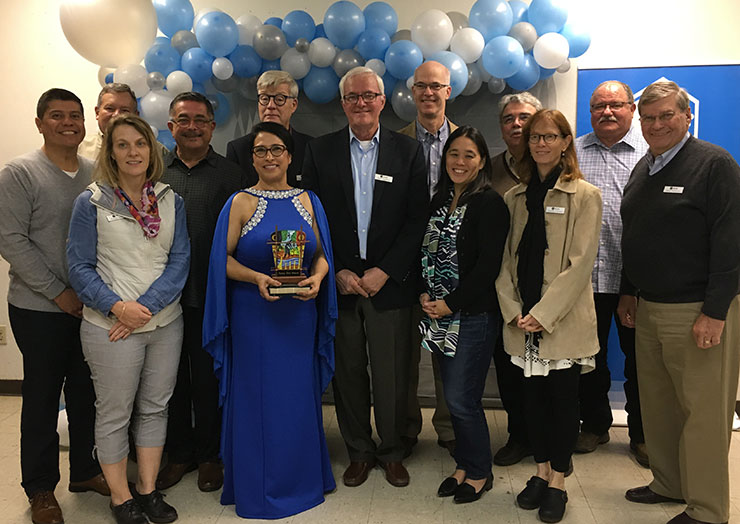 In the nearly four decades since Isabel Solorio left her native Mexico in search of, as she calls it still, ‘the American Dream,’ she has held tight to the idea that she wanted to give as much back to her adopted country as it gave her.

Originally from the state of Jalisco, Solorio followed an uncle and his family northward in 1980, settling in with them after they arrived in Five Points, in California’s Fresno County. Like so many of her relatives and compatriots, she worked in the fields, rising at 4:30 a.m. to spend long days picking tomatoes. Meanwhile, she observed the local economy, and how she and her fellow laborers struggled to make ends meet.

“When you work in the fields and must get up so early and then don’t get home until 5:00 p.m. or later, you don’t have the time or energy for really anything else,” Solorio said. She added that the often precarious work and pay of seasonal laborers are exacerbated by other aspects of rural life, such as long travel distances for grocery shopping and health care services.

But Solorio has defied all of this, structuring her time so that she can volunteer in the Lanare community she has called home for the past 20 years. Her time commitments pack a wallop: A regular fixture at—and organizer of—community events, such as Christmas and Easter celebrations for children. Solorio also coordinates volunteers to distribute food to needy residents two to three times per month. She is a volunteer member of the Fresno County Citizens Advisory Council, which reviews applications for and advises the county board of supervisors on grants. She was recently appointed to the Rural Communities Advisory Committee for the North Fork Kings Ground Water Sustainability Agency. She is also president of Community United in Lanare (CUL), which advocates for basic municipal services and clean water for Lanare residents.

This year, RCAC recognized Solorio’s efforts by giving her the biennial Yoneo Ono Rural Volunteer Award, which honors rural residents who have volunteered to make significant lifelong contributions to their community. RCAC’s board of directors presented the award to Solorio this month. The award includes a contribution to a charity of her choice. Solorio’s contribution will go to the Lanare Community Services District to complete needed repairs at the Lanare Community Center. “Isabel’s efforts and commitment to improving her community over so many years is really impressive,” said Stanley Keasling, RCAC’s chief executive officer. “She exemplifies the community leader who encourages, collaborates and takes responsibility for all types of tasks to accomplish a goal. The RCAC Board is excited to see what Isabel and her colleagues have accomplished.”

RCAC’s board of directors considers six criteria to determine the award winner. The service must have occurred within the rural communities RCAC serves throughout the rural American West, and must have been done for no monetary reward. Board members consider how the volunteer work improved the community’s quality of life and the needs of those served based on rural status, income, ethnicity and population. Criteria also includes the length and variety of the nominee’s volunteer activities, as well as the relationship of the nominee, project and communities to RCAC.

According to Eva Dominguez, a community development specialist who nominated Solorio on behalf of Self-Help Enterprises (SHE), volunteering is almost second nature to Solorio.

“Overall, she is just a great candidate for the award,” Dominguez said, adding that she has worked with Solorio on water issues and that Solorio has been the volunteer secretary to Lanare’s public water system since 2014. “Some people get paid for doing what she’s doing for free. She keeps everything well-organized and puts in time to go to trainings and workshops to learn as much as she can. That includes things like attending technical trainings about water contaminants.”

It was water issues, in fact, that drew Solorio to volunteer work.

The unincorporated community of Lanare, with a population of around 600, lacks basic infrastructure such as sidewalks and streetlights, as well as safe water. In 2007, therefore, when the community was able to plan for and build a water treatment center, it was significant.

“When they built it for us,” Solorio told Valley Public Radio in a June 2017 interview, “it was an exciting occasion and it was good.”

Unfortunately, the community had not budgeted for the plant’s potential operation and maintenance costs. Six months after it was built, the Lanare Community Services District had to shut it down. Filtering and treating the water proved more costly than anticipated; eventually, the district found itself $100,000 in debt. In 2010, it went into receivership. According to Dominquez, Lanare’s water was tainted with arsenic and as the community entered receivership, the water was unsafe for drinking. The transfer of the water system, she said, was due to mismanagement, mostly of finances, more so than the contamination.

It was then that Solorio and others established United Lanare, in part to organize fundraisers to help the district pay off the debt.

“I felt then that I could contribute,” she says. “And once I started working on the issue of water, I saw that there were other areas where I could also volunteer.”

She attended workshops to understand how to review financial records. When it looked in 2016 as if Lanare’s community center would have to close to help pay off the debt, she helped raise $1,000 to keep its lights on. Other efforts include advocating for water meters, safe pedestrian walkways, better transit service, access to public wastewater service, waste and litter pick-up and updating the decades-old community plan.

More broadly, Solorio has advocated for her community at the state level, speaking before California lawmakers in Sacramento about the issues facing Lanare and other low-income communities throughout the Central Valley.

“It’s very important for me that they understand the problems that exist in rural areas,” she says. She has discussed Lanare’s lack of access to clean water and unsafe wastewater disposal. “The life here is completely different than what it is in cities.”

Since CUL’s founding, and with Solorio heading it, the group has achieved tangible success. Lanare now has pedestrian infrastructure, a pilot rural transit program, and the Community Services District has become more responsive. Moreover, in 2017, the district started building two wells and so far, the water is potable. Once they are connected to Lanare’s water system, the water will be safe to drink.

“Lanare has become a symbol for the state’s long-term neglect of rural communities,” wrote Veronica Garibay and Phoebe Seaton, co-directors of the Leadership Counsel for Justice and Accountability, in nominating CUL for the Rose Foundation’s 2017 Anthony Grassroots Prize. Solorio has trained with the Leadership Counsel. “In meetings, workshops, hearings, and newspaper articles, whether Community United is present or not, Lanare is invoked as a signal for the urgency of investment in rural California and investment in drinking water security.”

Most especially at a time when immigrants like Solorio face increasing scrutiny and discrimination, the Yoneo Ono prize seems all the more apt to highlight one woman’s quiet dedication, civic engagement and good work.

“I know it’s a very difficult time for Latinos,” Solorio says. “I want to give back to this country which has given me so much. I want to show my appreciation. This country is rich, and we are lucky. I want to make things even better.”