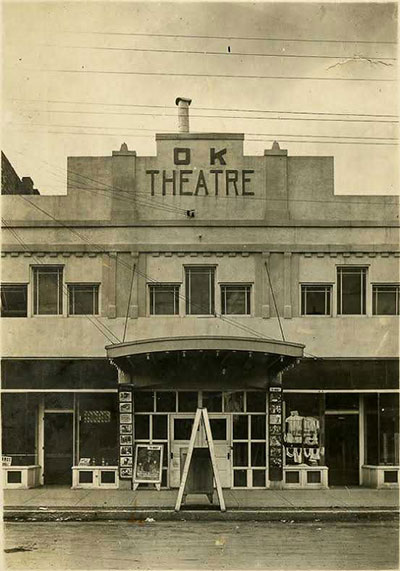 Back in the day – nearly a century ago – the OK Theatre in Enterprise was a shining light in eastern Oregon, hosting events both unique and routine. There were plays and musicals at the 350-seat, single-screen theatre and traveling Chautauqua, an adult education movement in the early 20th century that brought musicians, preachers and academic lecturers to rural America. There also were Sunday matinees, but only after town council members carefully approved them when some residents circulated petitions warning that the shows could interfere with church and baseball games.

And there was an even more worrisome challenge: while the OK Theatre’s construction commenced in October 1917, the influenza epidemic that swept across the nation in December 1918 prompted restrictions on public gatherings. Work on the building continued, however, including decorating the walls, finishing the electrical wiring, and bolting chairs to the assembly room floor. By the end of January 1919, the doors were thrown open and the newly born theatre was heralded in the local newspaper, at the time, The Chieftain (now known as the Wallowa County Chieftain):

“In opening the OK Theatre, we offer to the citizens of Enterprise and Wallowa County a complete modernly equipped comfortable theatre,” the editors wrote. “Artistic landscapes adorn the walls and the lights are decidedly pretty. The management promises that the picture shows will be of as high a quality as the house itself, and the theatre is bound to attract patronage from far and near.”

During the last century, however, time, weather and changing recreational pursuits have taken their toll on the once elegant Art Deco building, which in 2012 was placed on the National Register of Historic Places.

Much of the theatre’s original façade, however, including the tripartite storefront and entrance, has been modernized. The original lighting canopy was removed and replaced with a more modern marquee. The original doors and windows were replaced and the second story windows were covered.

But today still, the old boiler heating, plumbing, electrical and projection systems are in disrepair. The only bathroom, located downstairs, does not comply with the Americans with Disabilities Act (ADA). The carpet and stage curtain need to be replaced, and the seats need to be reupholstered. Total renovation costs are estimated at nearly $250,000.

Yet none of this dissuaded Darrell Brann, a musician and construction company owner who moved to Wallowa County in 2001 with his wife and family. He bought the OK Theatre in November 2013, intent on creating a premier regional live concert and performing arts venue, thereby combining his construction expertise with his love for music.

Brann grew up in a musical family. His father played rhythm guitar and his mother sang and played keyboard in a country band called Lincoln County Express that performed covers by the likes of Patsy Cline and Creedence Clearwater Revival. Brann and his brothers Dale and Craig learned to play acoustic, bass and electric guitar. They also sang in church with their mother.

Brann also runs a successful local construction company. Both naturally led to his interest in the OK Theatre.

“My background has been in buildings and restoration work,” he says. “I was interested in the quality of sound in a little theatre. In 2012, I booked a show in the theatre and I was thinking I would do it every now and again. But then when the theatre came up for sale, it really did affect the town. I saw rental income potential and so I decided to dig into it and start learning.”

He’s made good on his goal: in the last three years, he’s brought nationally recognized performers to the locale, including Grammy winners Dom Flemons and Asleep at the Wheel. Tickets sold out quickly; visitors came from as far as Spokane, Portland and Seattle to attend shows. Brann started selling subscriptions to performances, and said that the original 25 ordered could increase greatly if he could raise funds to fully renovate the theater.

Then, in 2013, city leaders approached RCAC for help with its downtown revitalization and economic development. There had once been a merchants’ group dedicated to revitalizing Enterprise’s historic downtown, as well as a main street group called Greater Enterprise Main Streets (GEMS).

The focus was three-fold: entrepreneurship, business development and catalytic projects.

Marko brought together city leaders, GEMS members the Wallowa County Chamber of Commerce, Northeast Economic Development District, and Wallowa Resources, a private nonprofit organization focused on environmental education and sustainable business development. He introduced them to WealthWorks training, which encourages community and business leaders to consider wealth values beyond financial benefits. All agreed the OK Theatre should be a priority for RCAC assistance as a catalyst for entrepreneurship and downtown business development.

“We helped develop a value chain map highlighting how eight wealth values relate to the theatre,” Marko says. “Intellectual, individual, social, physical, natural, political, financial and cultural. The OK Theatre can be a facility with multiple wealth values for the community, and Brann’s vision for the theatre embraces this. He sees the theatre not only as a place for music and movies, but as a community center for events, fundraisers and benefit for local businesses.”

With additional funding from U.S. Department of Housing and Urban Development (HUD) in 2015, RCAC helped Brann draft a business plan to articulate his theatre plans, estimate improvement costs, develop a marketing strategy and target funding to support renovations and bring his vision to reality. Much of that work concluded in December 2016.

Meanwhile, RCAC surveyed local businesses to document the OK Theatre’s impact on Enterprise and the local economy. Those surveyed noted that the theatre brings community residents to downtown along with tourists from outside Enterprise. More than half of these business owners have expanded their hours or hired new employees specifically to serve theatre patrons, and they foresaw future job creation with the increased business in downtown Enterprise.

In January 2017, Marko found more resources for Enterprise and its theatre.

The State of Oregon Historic Preservation Office offers communities funding through its Oregon Main Street Revitalization Grant Program under the Oregon Parks and Recreation Department. Marko helped GEMS apply for the grant and worked with Dianne Daggett, a volunteer with consulting experience in Enterprise, to write the application so that the OK Theatre could leverage funds for renovations based on the business plan.

The application included business survey results and 12 letters of support highlighting the community and economic impact of the proposed project. By May, Marko and Enterprise learned GEMS had been awarded the maximum amount, $100,000. They would use the funds to upgrade restrooms to meet ADA requirements, improve electrical service such as, heating, ventilation, air conditioning, sealing and insulating, and to retain the building’s historical character.

The grant award has galvanized the Enterprise community around the OK Theatre and downtown revitalization, Marko says.

Brann announced the grant award at a special concert event and The Wallowa Chieftain newspaper published an article on the grant and quoted Marko: “It (the Oregon Main Street Revitalization Grant Program) really engaged the city, as well as businesses to show support for the theatre, which helped get the grant.”

The momentum continued. In August, Oregon Public Broadcasting (OPB) featured the OK Theatre on its “State of Wonder” program, which highlights unique characteristics of Oregon communities. Then, in October, Brann initiated a fundraising campaign, “Countdown to the Centennial,” with a kick-off event featuring local food and micro-brewery Terminal Gravity. The campaign’s goal was to raise $56,000 to further support renovating the OK Theatre by the 100th anniversary in 2019.  Brann also intends to apply this year still for a façade grant through the State Housing and Preservation Office (SHPO) for external improvements to the OK Theatre.

Brann meanwhile looks ahead as he continues to manage the theatre’s activities, including booking bands and private events, promoting shows and organizing clean-up after concerts. When he needs help, his wife and five young children pitch in.

“Right now, all the kids enjoy this stuff,” he says. “This is something we can take on that we can all do together.”

The OK Theatre renovation is but one of several projects in Enterprise. Since 2015, new downtown businesses have emerged, including Dandelion Wines and Sugar Time Bakery. While RCAC was not directly involved in these businesses, it reflects what a local contractor, Andy McKee, who has renovated another historic building observes: “Enterprise has momentum and momentum is contagious. Once people see things happening, more can happen.”

All photos were provided by Darrell Brann, OK Theatre owner.