Don’t Fence Me In

Arbor Fence benefited well from an RCAC loan, is grateful for it, and looks ahead now to further business expansion

Several years ago, Ron Wooden was a broken man facing an uphill climb. His was struggling with his new business in Sonoma, and his wife had left him with four young children.

Today, however, in spite of many hardships, Ron owns a successful family-run business. Thanks to a strong business acumen and dedicated staff, his Arbor Fence fencing company in Sonoma, Calif., has added nine new trucks and more than 20 employees. The business, moreover, has consistently received Diamond Certification for its excellent business practices that reflect strong customer satisfaction. This San Francisco Bay Area rating is credential based and requires extensive monitoring before certification is granted.

It hasn’t been easy. Between recession and embezzlement, county ordinances and resettling in Sonoma County, he has had to think quickly on his feet and look ahead, no matter what the circumstances, to both sustain and advance his company. “At one point, I had to beg and borrow to keep my business running,” he says. “But I believe in honest work and working hard.”

In the 1990s, Ron moved to Sonoma because he worried about raising his children in Fort Bragg, where drugs, he says, were flooding the streets. He’d spent 12 years in the seaside town running his first business, Woody’s Weld-All, which he established in 1978. Steel-hulled fishing vessels, loaders, garbage trucks, cranes, logging trucks, mill equipment, trailers – anything that could be welded, Ron would take it on.

He set his sights on selling off the business – which he eventually did, to his brother – and starting anew. The first step was subscribing to the Santa Rosa Press Democrat newspaper, so he could search businesses for sale. It took patience and persistence, but in 1990 his eyes fell upon an advertisement for a one-employee, one-truck fencing company. 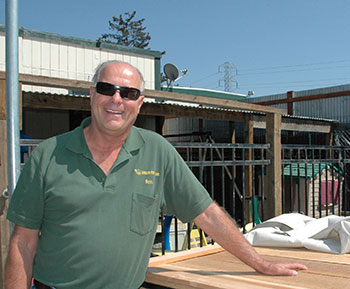 “My main goal was to find something that wasn’t a life-and-death business like welding,” Ron recalls.

Though the profession would change, the quality of his work wouldn’t.

“With every job, I think, ‘my name is on that fence,’” Ron says. “We’ve become known for our quality.” And, Arbor Fence also is known for its unusually strong dedication to its employees and for the support of women in the business. Ron’s daughter, Genevieve, who was about to enter the sixth grade when he moved to Sonoma, eventually went to work in her father’s business, and is today the general manager. His sons, Casey and William, who were ages nine and 17, respectively, when they moved to Sonoma, also signed on with Ron’s business as they grew up. Casey now works as a television executive producer in Los Angeles, but William is still around, running Arbor Fence’s welding shop and automatic gate operations.

Ron is reminded of his dedication to his employees when he notes the stacks of old fence wood and metal wiring piled up on his lot. A few years ago, he had to pay about $40,000 per year to have the material carted away for disposal. Genevieve suggested selling it on Craigslist, and the following year, the hauling price came to just $5,000. What’s more, Ron encouraged his contract and customer service coordinator, Cassidy Everitt, a single mother, to take over the project, telling her she could increase the asking price on the website, and keep anything over the company’s price.

Just behind the main office is a playground where Cassidy’s children play, along with Ron’s grandchildren, saving his employees, he claims, up to $5,000 a year on childcare.

“We take care of each other,” he says.

The boom in his business is partly thanks to blood, sweat and tears, like most thriving companies. But, he is also quick to point out, it couldn’t have ever happened without a loan from the Rural Community Assistance Corporation.

Ron’s business took off in 2008 when Genevieve, his daughter, hired a friend, Sasha Mariolo, to work for Arbor Fence right out of college. Mariolo was instantly committed to the family business, commuting from Sacramento to Sonoma until she eventually moved to the Napa Valley. With her master’s degree in business administration, she quickly recognized the difficulty of getting a small business up and running.

“There was debt, and the [profit from] current projects was going to pay that down,” she remembers. “We just couldn’t take on bigger projects, or grow, because of that. We couldn’t compete with bigger companies in Santa Rosa. We needed more cash. We asked ourselves, ‘How can we get ahead?’”

In considering the ebb and flow of company debt, she realized that a bank loan would be unrealistic. “For small businesses, it’s very difficult,” she says. “They tend to undermine you. They want bigger applicants.”

Instead, she started “collecting business cards,” around Sacramento, where she was still living at the time. She went online. One lead led to another, and then another, until she found herself on the phone with Robert Longman, RCAC’s Loan Fund production and credit manager.

“His attitude from the beginning was, ‘What can I do to help you?’ and ‘Let’s do this as a team,’” she recalls.

“A working capital loan, via RCAC’s Small Business Loan Program, enabled this family to run a business and to expand its operations,” Longman says. “It also provided additional employment opportunities in the Sonoma area. RCAC’s Small Business Loan program is designed to assist small rural businesses such as Arbor Fence in meeting their goals. We are happy to have been a part of their success.”

With the loan, Arbor Fence paid down its debt and hired more employees. And, despite the growth, Ron continues to meet with customers before a job gets underway, saying he wants to preserve the “family feel” of his business.

Although the last three years have been difficult for Arbor Fence, the drought, says Ron, has encouraged more home improvement projects in the area. He wishes he could advertise better. Arbor Fence lies in the deep back of an industrial lot, along a narrow road off of Highway 12, with an almost quickly overlooked sign announcing its location, and county regulations bar him from placing better signs at the front.

But he shrugs that off for now. In looking back at the past 15 years, as he struggled through a punishing divorce, bought and sold a family business, and found his way out of debt, he says with a laugh, “Back then, I was already in the basement, so there was nowhere to go but up.”