Fallon, Nev. – When Kelli Kelly arrived in this western Nevada desert community in 2009, the seemingly endless austere landscape might have given her pause.

Her boyfriend at the time – who has since become her husband – suspected she might be put off. Fallon has a population of around 9,000 and Kelly recalls his warning that relocating there from her San Diego home could be “a relationship killer.” He asked her to think carefully before joining him at Naval Air Station Fallon, better known as the “Top Gun” school and the largest single employer in Fallon and Churchill County. Fallon also sits at the western edge of Highway 50, the so-called loneliest road in America.

Kelly is a chef, and continuing that career in Fallon may also have appeared an impossible endeavor.

But she didn’t feel that way. Where others might have seen just infertile land and limited job opportunities, Kelly zeroed in on the enduring family dairies and farms in the region that produce incomparably savory winter squash, tomatoes and peppers, and where herbs like rosemary and thyme grow wild. She learned of the vibrant Basque settlers in the region who brought their unique culinary traditions with them to Nevada. While the land to the average eye appears arid and incapable of producing crops, Kelly points out that Churchill County is in fact agricultural, with some 50,000 acres irrigated with water from the Truckee-Carson Irrigation District.

“And I ended up meeting a lot of really cool people,” she recalls. “I liked the town because it has a little bit of everything.”

She readily lists those: an arts council, a youth group, and an overflowing cornucopia of locally sourced food, including at the restaurant, The Slanted Porch, where she went to work as a sous chef in March 2010. A few years later, the restaurant would be featured on the Live Well Network, cable show Food Rush.

“We found,” she says, “that this was a community that had a lot going on.” 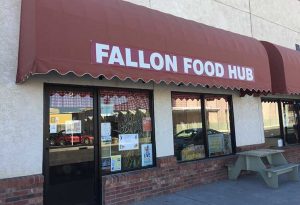 This would later include the Fallon Food Hub, which was a natural draw for a food aficionado and chef such as herself. Founded in March 2016, the small cooperative grocery store in Fallon’s historic district sells $35 annual subscriptions to patrons. Patrons who subscribe receive a basket of fresh, locally grown seasonal fruits and vegetables and a 3 percent discount on purchases, plus a vote in Food Hub operational matters. According to the U.S. Department of Agriculture (USDA) 2012 Census of Agriculture, Churchill County is home to more farms than any other Nevada county and most of these farms are small and mid-acreage.

When one considers that USDA defines the popularly used term “locally sourced” as any food product distributed within a 400-mile radius, Fallon’s truly home-grown farm-to-fork industry may be a rarity in the nation.

The Food Hub has become vital to the community, especially in the older part of town where it is located, as there are neither grocery stores nor public transportation in the area. The Food Hub has also expanded to sell value-added products as well as health and beauty products.

What it needed, however, was an executive director and funding to pay this person’s salary. Earlier this year, Rural Community Assistance Corporation’s (RCAC) Loan Fund provided a $50,000 working capital loan to the Food Hub for that purpose. This funding would pay for the position which, today, is Kelly’s full-time job. Her duties include managing staff and the Food Hub’s various programs, writing grant applications, running the store and managing its finances.

As she shows a visitor around the cozy store one sunny fall afternoon, it’s easy to see her affection and knowledge. She picks up a couple of jars beside the checkout counter, which contain rosemary and thyme, and explains that a local farmer found the herbs growing wild on his property. She next handles some healthy snack peppers and, nearby, Hopi Orange Winter Squash, that Kelly mentions is the first crop this particular farmer attempted to grow and which the average consumer might assume are run-of-the-mill pumpkins. Her authority on the subject is obvious, as is her delight in picking apart what makes for delectable pleasure.

“From experience I can tell you it has a much richer flavor than a standard pumpkin,” she says. “There is much to say about heirloom varieties versus agribusiness growing for productivity. I think what is important is small producers continuing to grow heirloom varietals and maintaining crop diversity in the face of an industry that is reductive in focus … only growing the varietal that produces a lot, stores well and is easy—though less nutritious and flavorful.”

Later, a merchant comes by to check out his stock of barbecue sauce that he now sells at the Food Hub and chats with Kelly about recent sales.

According to RCAC loan officer Darryl English, the Fallon Food Hub has developed relationships with local farmers and producers so they might showcase and sell their wares. The small business loan, he says, is an economic stimulus to Fallon and rural Churchill County.

It also reflects how business leaders in this rural community are focused on self-sufficiency.

Nathan G. Strong, executive director of the Churchill Economic Development Authority, notes two areas where Fallon and Churchill County are independent: agriculture and renewable energy. It is Nevada’s top dairy producer and home to the Dairy Farmers of America’s whole milk dry powder production facility. It is also home to the emerging gluten-free and drought tolerant Eragrostis tef grain industry. And its triple hybrid power plant, the only one in the world, generates 10 times more energy than its residents consume.

The Fallon Downtown Merchants Association aims to breathe new life into its downtown. The Food Hub is essential to this; members reason that with economic revitalization comes healthy residents. Nearly 30 percent of Churchill County’s residents are diagnosed as obese, nearly 9 percent of its adults have diabetes and nearly 30 percent have high blood pressure. These rates are all slightly higher than the state’s averages. The Fallon Food Hub Cooperative suspects that these rates may have risen following grocery market closures in the area.

“They expect that the Fallon Food Hub will provide access to a source of healthy food products on the east side,” English says, “and especially to the low-income customers.” It also gives area residents another reason, he adds, to go downtown and this can help revive the historic corridor. As of October, the Food Hub could count 116 active members.

The timing was right to invest in the Food Hub in light of the farm-to-fork movement, which has dovetailed, too, with rural tourism, and more and more Americans wanting to know where their food comes from.

More than two decades ago, Fallon started investing in what could draw visitors who would in turn enrich the local economy. It is part of the Pony Express tourism circuit, and the Fallon Convention and Tourism Authority has successfully marketed itself based on its proximity to Reno and Lake Tahoe.

But perhaps most important was this partnership with local farms and restaurants in the farm-to-fork movement. As Fallon Convention and Tourism Authority executive director for tourism and special events, Jane Moon, puts it, “Farm-to-fork was already a lifestyle for us. What you see around the nation is the way we’ve lived for years. It’s something embedded in our community.”

Among other beneficiaries and participants around Fallon is Rick Lattin, a fourth generation farmer whose 400-acre farm includes one of the most elaborate and oldest corn mazes west of the Mississippi River, as well as an on-site bakery and, in the fall, a pumpkin patch. Lattin is also well-revered for his heirloom peppers which, as he tells it, a defecting Romanian acrobat introduced in the region. Most of the produce in the Community Supported Agriculture Basket the Food Hub sells comes from Lattin’s certified organic farm.

One sunny October afternoon, as he leads guests around the pumpkin patch, he describes how when he was a child, there were still sand dunes around his family’s farm.

“Yes, farming in the desert,” he says with a nod and some irony, remembering his youth. But then he adds, with a measure of genuine modesty that today, he delivers his produce to 35 restaurants and has 10 loyal catering clients, as well as his plentiful stock sold at the Fallon Food Hub.

RCAC provides training, technical and financial resources and advocacy so rural communities can achieve their goals and visions.

Thrilled to see the Gov. sign the #cabudget & create the CA Innovation & Investment Fund! Thanks to @CASenCaballero & @MoniqueLimonCA for their incredible leadership to make this a reality! CA's 100+ CDFIs will soon get to work deepening impact in low-income & BIPOC communities!

Thrilled to see the Gov. sign the #cabudget & create the CA Innovation & Investment Fund! Thanks to @CASenCaballero & @MoniqueLimonCA for their incredible leadership to make this a reality! CA's 100+ CDFIs will soon get to work deepening impact in low-income & BIPOC communities!

Learn more about the @USDA's Section 502 Direct Loan Program & how it can increase #homeownership opportunities for rural Americans. We've partnered with @usdaRD, @RCACorg and @RuralHome to deliver this critical certification. Check out upcoming trainings! https://bit.ly/3LWYb20