Starting out as a young couple, Alex and Angela Anderson had much in common. They both came from small towns in Utah where their families knew each other. They were both focused and careful about saving money, and when their children were born, they were both determined to provide for them as best they could.

Still, despite saving to buy a house while living three years in a small apartment, they never hit their target. Their perseverance, however, was not lost on their realtor, who was on the look-out for possible candidates who might benefit from Southeastern Utah Association of Local Government’s self-help housing rehab program.

U.S. Department of Agriculture Rural Development provides funding to SEUALG to implement the Mutual Self-Help Housing Program. The program provides homeownership opportunities to low and very low-income residents. It requires qualified families to work together to build their homes and can lead to vibrant neighborhoods where families know and support one another. The “acquisition and rehab program” creates homeownership opportunities and helps preserve current housing stock. Participants purchase homes that need work, then perform the work themselves—providing the sweat equity that enables them to obtain an affordable mortgage.

“Our realtor had shown us dozens of houses, and we’d just about given up,” Angela says, noting that the houses were either unaffordable to them or they didn’t fit the family’s needs. “But then she attended a seminar for self-help housing and thought of us.”

The real estate agent referred the Andersons to the Southeastern Utah Association of Local Governments, where Barbara Fausett is the housing rehab program manager.

RCAC works with rural nonprofit housing organizations, such as the Southeastern Utah Association of Local Governments to create opportunities for working families to access safe and affordable homes. RCAC works with these organizations to resolve program management and program implementation issues and meet key performance milestones.

Fausett says “the Anderson family is what this program is all about. They are very thrifty with their money, and they do not owe anything on a credit card,” she says. “It is rare to see a young family not in debt.”

In October, Alex and Angela found a U.S. Department of Housing and Urban Development-foreclosed home with three bedrooms and two bathrooms in the appropriate named town of Helper. After learning that they were the successful bidders at $87,000, they spent the next three and half months reinventing the house, which sits on a quiet street at the foot of a lightly forested slope. The neighborhood, according to Fausett, is desirable and popular; and the Andersons’ home would resell quickly if the family decided to put it on the market.

When Angela and Alex walk a visitor through their new home, their pride is palpable.

Aside from the sweat equity that went into the rehab, their work is noteworthy when one considers that Alex continued to work full time at Intermountain Farmers Agency. Angela attended college full time, facing many exams during the course of the renovation work, while caring for their children Archer and Alexis, ages four and two, respectively. Alex recalls in particular one 14-hour day that stretched deep into the night as he and a friend stripped walls. Angela—when she wasn’t learning how to install electrical sockets, a skill, she now says, “is extremely handy to learn”—made time to chronicle the venture on a blog www.angieand.wordpress.com, with each small success accompanied by photos.

The learning curve for the two novices was formidable. They had to get comfortable with repairing, taping, texturing and painting drywall. A $40,000 budget—which is the ceiling for rehab projects—would go toward siding; replacing windows and doors; constructing a new roof; installing new kitchen cabinets, countertops, a sink and disposal; laminate and carpet; extensive wall repair; lighting; and deck railing and sealing among other tasks.

The family managed within the budget well enough, including limiting use of a rental dumpster to just one load so they would have funds left over to install a new furnace, an amenity not afforded to such projects but nearly essential during Utah’s long winters.

“They hit the ground running,” said Jeff Hoel, the construction supervisor who oversaw the work, and also planned and laid out the sequence of each task so it would all move along quickly. He taught Angela and Alex many of the skills they needed to complete the work, including installing laminate flooring, a tub surround, toilet, doors and cabinets. “It was really all learning by doing.” 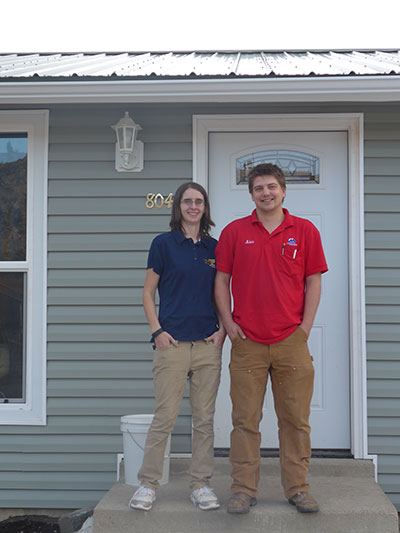 Angela and Alex Anderson at their new self-help rehab home. 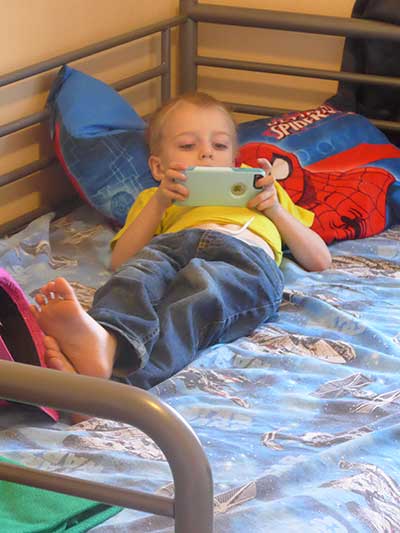 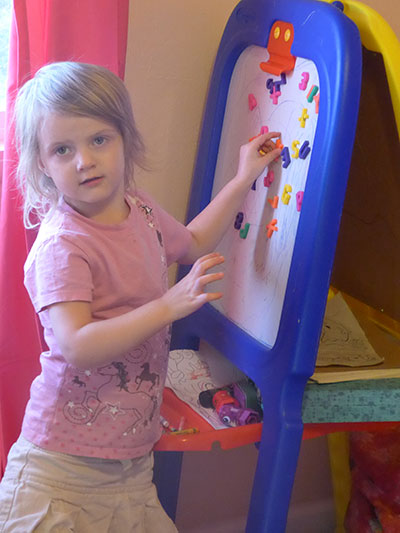 Alexis playing in her new room. 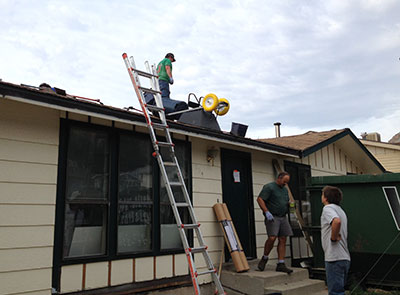 The home's asphalt singles were replaced with durable metal. 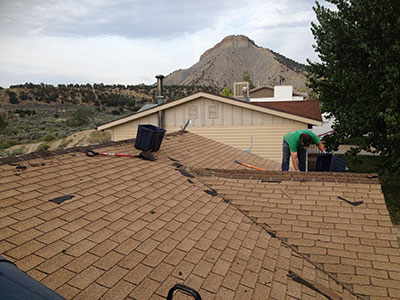 Stripping old shingle tiles off of the roof to replace with metal. 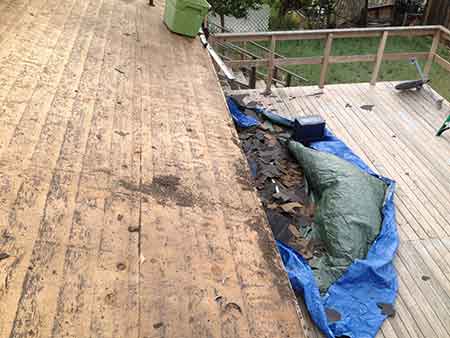 Roof stripped and ready for metal. 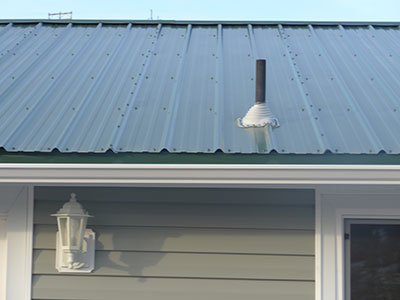 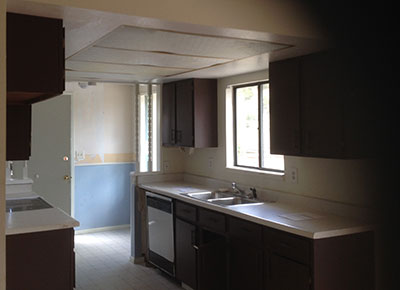 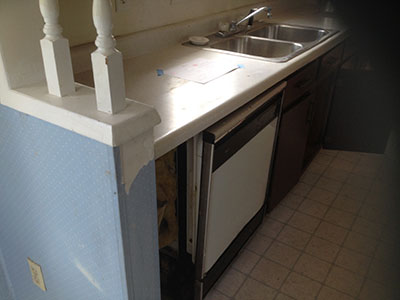 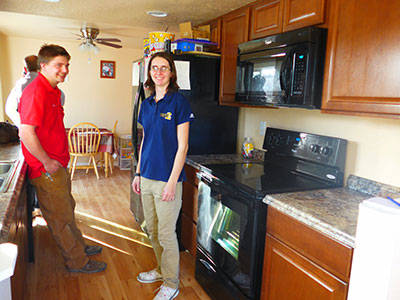 Alex and Angela in remodeled kitchen. 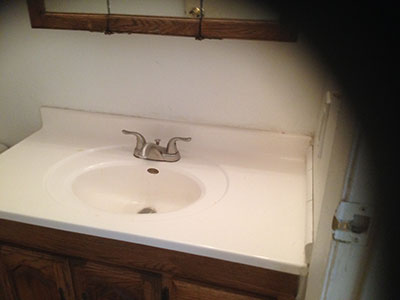 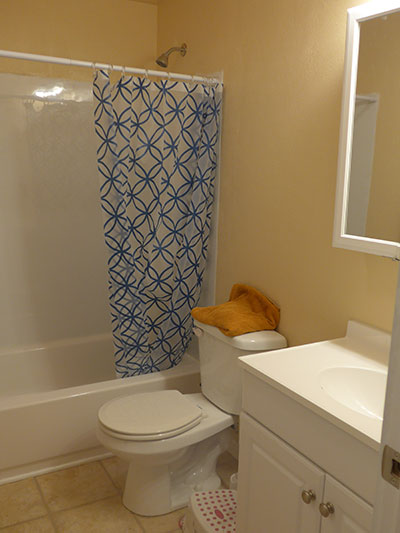 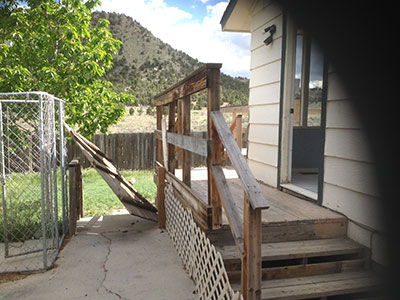 Side porch before repainting. 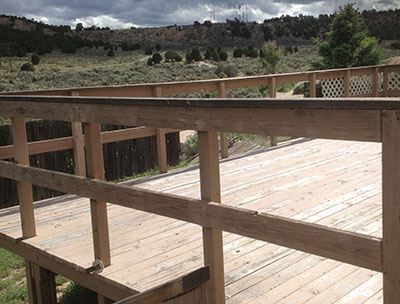 Deck railing before new paint and safety material was added to the sides. 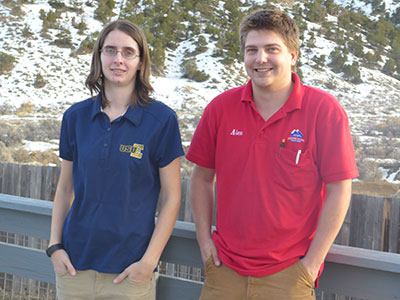 Angela and Alex in front of new railing.

When Angela and Alex walk a visitor through their new home, their pride is palpable. Angela talks about the faint apricot-colored paint on the walls, and how she and Alex decided on it. She recalls with a laugh and a roll of the eyes how when it came time to buy appliances she was so exhausted she simply left it up to her husband, who happily complied. She describes in detail the strength and patience it took to remove the two-inch deck screws in the breakfast nook adjacent the kitchen. Meanwhile, the Anderson children romp around their new home as if they’ve lived there all their lives.

As for Fausett, who is used to helping families reach their goals, the Anderson family was exceptional to her. She said she offered them financial education, a critical aspect to families achieving stability.

“I assisted them in learning how to shop for insurance and to get their taxes reduced,” she said, “as the county assessed them much higher than they paid for the home.”

The self-help acquisition rehab program, she said, requires preliminary property appraisal and cost estimates that can be unknown early on. This requires more work but is imperative to the program’s success.

“We do an ‘as is’ and an ‘as improved’ appraisal on all projects,” she explained. “You don’t get a dollar for dollar on your improvements, so we do our own in-house as improved appraisal prior to them even making a purchase offer, to make sure the deal won’t die in the appraisal process.”

The “as improved” appraised value on the home, she added, was $131,000, which gained the Andersons 3 percent equity on a home they didn’t put any down payment on, and also benefits the lender.

“I worked for 22 years as a conventional lender,” she added, “and five years as a real estate appraiser, and the work I do here is three times the work of a single project.”

Fausett said that she may be accused of spending too much time with program participants, “and yet I feel like someone has to walk them through this process so they can be successful at it the first time around. There are lenders … that tell them, ‘this is your payment and all you have to do is sign here’ (but) they are not told the how to or why they are doing it. This is a recipe for failure, and I take pride in making sure they not only know how to do something, but why they should do it.”

It really is a lot,” said Fausett, “but I’m happy to do it and see the pride in ownership that Alex and Angela have gained.”

She said that she imagines Alex and Angela, five years from now, having completed their education and working in jobs that will support them well. Moreover, they will have invaluable home ownership tools—both practical and financial.