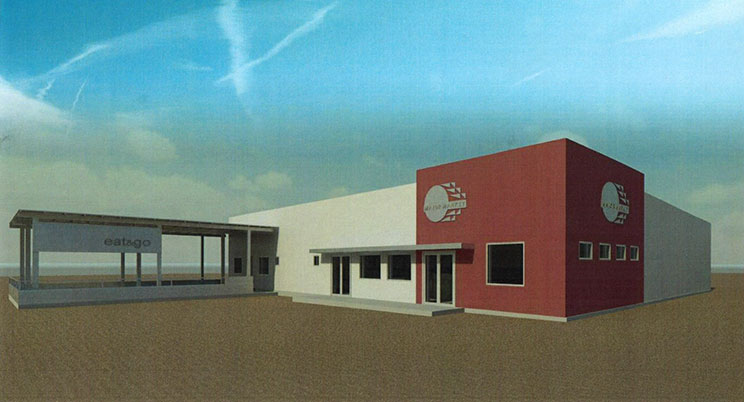 Zuni Reservation, N.M. – Some three decades ago Darrell Tsabetsaye opened a convenience store called Major Market on the Zuni Reservation on the Arizona-northern New Mexico border. Though such stores are fixtures on many street corners, Tsabetsaye’s was neither common nor convenient to establish.

As he tells it, the original stucco and stone building at 1252 Highway 53, which included a couple of dusty, ancient gas pumps, had been vacant and deteriorating for years. Someone needed to open something there, he recalls thinking. Back then, there was only one other gas station on the 720 square-mile Reservation.

Born in 1960 and raised on the Zuni Reservation, Tsabetsaye has an innate entrepreneurial spirit. His parents traveled the American West selling Native American art and jewelry. As a young man, he followed an academic route, enrolling at the University of New Mexico in Albuquerque.

“I studied at the American Indian Law Center there,” he says, explaining that the program’s federal funding supports training of up to 50 Native Americans in the center’s 12-month paralegal program. “Part of the training was to work in a law firm, but the other component was understanding federal and state governments and their relationships to Native communities, financing and economic development.”

In establishing his business, Tsabetsaye says his motivation was partly his own financial interests, but also to offer employment to Tribal members. Initially it worked out well: The building and gasoline infrastructure were already in place. After preparing a feasibility study, a business marketing survey and then writing a business plan, he was able to obtain an $85,000 loan from Sunwest Bank.

But there were drawbacks. When he purchased the property, it did not include the building.

“I only purchased the retail asset of it,” he says. “I had a 24-year lease agreement and by the time I reached the 22nd year of that, I had had to make a lot of improvements to the business to meet federal and state health codes. There were problems with the roof leaking,” he says, noting that Tribal government and Bureau of Indian Affairs (BIA) rules required that the tenant in these circumstances, rather than the landlord, is responsible for such upgrades.

“The fact is, at the end of the day, none of it would belong to me.”

And so begins Tsabetsaye’s story of having an idea and working hard to bring it to fruition, despite significant hurdles to access financial support.

After graduating from college, Tsabetsaye interned at several law firms before returning to the Zuni Reservation where his pregnant wife was living. He found himself involved with reforming its school system (one of the largest in McKinley County) and it introduced him to community service. It also led to working as a Tribal prosecutor, handling cases relating to employment rights and economic development. He was 21 years old.

But despite all of this activity and the fulfillment of helping his community, he would pass by that vacant building with its dusty gas pumps and imagine the possibilities. Gradually, his idea germinated into, as he puts it, “a smaller version of the Whole Foods concept, with natural and organic produce, meat, a smoothie bar and a restaurant. I basically locked myself into a little room and worked on a concept, cost and market analysis and financial projections. I drew up a business proposal.”

But that’s where his plans stalled, for he soon found he could not get a bank loan to refurbish the existing building or start up his new business. He approached three banks in Gallup; all refused him.

“They basically kicked me out,” he says. “It’s too far-fetched, they said. You have no credibility, no established credit, and you’re on a Reservation, which is under federal jurisdiction.”

It was a sobering, discouraging experience, but Tsabetsaye remained hopeful.

Eventually, by asking around, he found a Department of the Interior program offered through the Bureau of Indian Affairs (BIA) that funds Indian-owned business start-ups, whereby if a lender showed interest in the business, the BIA would guarantee up to 90 percent of the loan. Through the program, a banker eventually gave Tsabetsaye an $80,000 loan. Then, with sweat equity, he set about stripping down the building and repainting the interior.

It took 10 years, he says, to finally turn a profit. Between 2002 and 2004, he brought on more employees and made upgrades to the property so that he could sell gas.

“It wasn’t a lot, but it was an honest living,” he says with a noticeable measure of pride. “My wife and I gave each other a salary of $50 every two weeks. We put our six employees first. It wasn’t much, but at least we were doing what we said we would do. We kept promises.”

While his kids were in college, he continued to successfully operate Major Market. In 2004, after 16 years, he sold the business to a regional convenience store chain and instead started raising Angus/Limosin cattle. He also offered marketing management and business consulting services to several Native American Tribes, drafting feasibility studies, grant writing, and working with large energy firms seeking to develop alternative energy initiatives on Tribal lands. He consulted on a large environmental remediation project, a travel center and hotel projects on behalf of several New Mexico pueblos.

But the idea of returning to his initial venture never faded.

In spring 2019, Tsabetsaye will re-open Major Market a quarter mile east from the original site. The new Major Market store will replace the original, which Tsabetsaye opened at age 21. The new store will include a fresh food deli and will stock organic foods. It will contract with Zuni Tribal members to supply healthy foods for schools and will support a health clinic and health programs, such as for diabetes, high blood pressure and obesity prevention.

Aside from his store “there are few local offerings around here for healthy eating,” Tsabetsaye said. “For fresh, healthy food, community members have to drive either 40 miles north to Gallup or 130 miles to Albuquerque. We’re very small compared to other Tribes but we have the same social problems they do. Unemployment here is 60 percent. There’s alcoholism, drug use … I would like to create employment opportunities.”

Tsabetsaye’s two sons gradually followed in the footsteps of other young Tribal members around the country and left the Reservation, in this case, to Albuquerque. The eldest, Shaun, graduated as an electrical engineer and later acquired a master’s degree in business administration; he specializes in efficient manufacturing and inventory management. The second eldest son, David, studied culinary arts and worked as a sous-chef in the high-end resort industry and Tsabetsaye’s daughter, Nikki, studied architectural engineering at Shaun’s encouragement but then eventually enrolled in culinary school and now works alongside David.

His children may have been gone, but they never fully left the Zuni Indian Reservation, at least not in spirit. Several years ago, they felt called back to the community, in part to help their father reopen Major Market.

“When they were young, we never really took them on vacations because we were too busy running the store,” he recalls. “We’d take them traveling when we would go to inspect inventory or make bank deposits, because we didn’t have daycare back then. They grew up knowing that everything was centered on the business.”

Major Market’s reopening is the first project to come about through a unique partnership between Rural Community Assistance Corporation (RCAC) and Confluence Philanthropy.  Confluence Philanthropy and its members jointly developed the Rainmaker’s Investment Collaborative to expand access to capital in Native American communities in Arizona and New Mexico. RCAC is the Collaborative’s key investment partner.

The Collaborative brings together investors. Last year it began laying the groundwork for more Tribal capacity in impact investing partnerships. RCAC was selected to act as an intermediary to locate potential investments and build a pipeline of opportunities across the Southwest.

RCAC applied for and received a $1 million grant and PRI (program-related investment) from the W.K. Kellogg Foundation, which is one of the Collaborative’s funders.

RCAC will use the PRI to provide loans to Tribes in New Mexico and Arizona and as Kellogg’s key investment partner, RCAC will work with Native CDFIs in this venture.

One of those CDFIs RCAC has partnered with is Native Capital Access, a Native CDFI. Native Capital Access is an approved lender through the Bureau of Indian Affairs Loan Guarantee and Loan Insurance programs and, as such, makes loans to Tribes, developers and individual Tribal members, to encourage economic, community and small business development.

RCAC, with NCA as a participant, provided a business loan to support Major Market, the first project to benefit from the funding. Tsabetsaye is appreciative.

“Without it, we wouldn’t have been able to do it,” he said.

Major Market is but one example of the types of businesses that the Collaborative funding can support. Through the Collaborative, RCAC’s loan fund will offer financing for energy efficient affordable housing, infrastructure, community facilities, Native-owned small businesses, sustainable agriculture, nonprofits working in Native communities or with Native populations and other mission driven social enterprises.

“The Kellogg Foundation funds are important in many aspects. The funding not only allows RCAC to build Native CDFI capacity and provide loans to new and expanding native businesses but it also starts at the beginning with the native entrepreneurs,” said Pam Higgins, RCAC rural planning and capacity building manager. “The Building Rural Economies program will work with three New Mexico Pueblos to provide ‘Start, Grow, Revive Your Business,’ training. The BRE training will provide an in-depth look at what it takes to successfully operate a native-owned business. The program also includes extensive follow up and technical assistance to each of the native entrepreneurs to ensure success.”