The road to arsenic free drinking water for Arvin, California 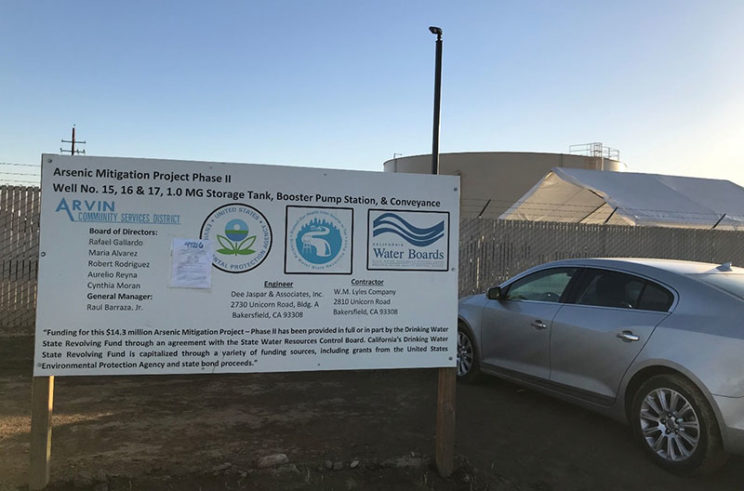 If you’ve ever driven through California’s Central Valley, odds are you may have missed a pretty resilient small town tucked away in Kern County. Located just a few miles southwest of Bakersfield, the town of Arvin, California has often found itself in the news due to being on the wrong side of a long uphill battle to get in compliance with Safe Drinking Water Act standards. Then one day in early October 2021, Arvin Community Services District (CSD) general manager, Raul Barraza, sent out an email to a group of Arvin residents and leaders  to share some big news about the Arvin Arsenic Mitigation Project. Imagine my excitement when I heard–that after 13 years—the water in Arvin had finally been deemed safe to  drink!

Raul also asked me to speak at the announcement ceremony, to which I gladly agreed. But when I got down to writing my speech, I started to reflect on what the Arsenic Mitigation Project meant to me, not only professionally, but on a personal level.. I knew I couldn’t simply write down what it meant, so I decided to wing it and go on stage and just speak from the heart. In hindsight, maybe that wasn’t the greatest idea.

For me, the story of Arvin’s arsenic woes goes back way before my time with Rural Community Assistance Corporation (RCAC). My family moved to Arvin in 1994, when I was only three years old. Back then there was only one traffic light in the whole 13,000 population town! Arvin has since boomed into a three-traffic light town with a population of 21,000 people, but it is still very much ignored and lacks many resources. My parents were farmworkers that became fairly involved with local grassroots organizations, like the Committee for a Better Arvin, during my middle school and high school years. The big issue back then was a county dump site just a few miles out of town that would emit foul odors that did not thrill the residents. We would go to strikes and demonstrations to urge the county government to relocate the dump. The effort was a success, and this is when I began to care about environmental justice issues affecting small towns that often go ignored.

Then in 2008, the U.S. Environmental Protection Agency (EPA) lowered the Arsenic maximum contaminant level (MCL) threshold from 50 to 10 parts per billion (ppb), which pushed Arvin completely out of compliance. There had always been water quality issues, so we never drank the tap water, mostly due to taste and turbidity, but the arsenic violations were intermittent as the arsenic levels fluctuated between 30 to 60 ppb. Arvin would only occasionally be out of compliance under the original 50ppb MCL. That was just the way of life out there. We drank out of water bottles or the refillable five-gallon jugs—never the tap. I just thought that’s the way it was everywhere.

But when I went to college in the Bay Area and everyone out there drank and refilled their reusable bottles straight from the tap, it was a huge culture shock. And I was like, ‘Wait a minute, we’ve been deliberately told not to do this back home for as long as I can remember! Then again, we don’t have the luxury of having pristine Hetch Hetchy water coming out of our taps.’ I also remember my first year at UC Berkeley(Cal), when I took an Introduction to Environmental Science course. This course touched on environmental issues from climate change to eutrophication (excessive richness of nutrients in a lake or other body of water), to air and water quality depletion all over the country. I also very distinctly remember South Kern County, and specifically Arvin, being presented as a case study during a lecture on bad air quality caused by smog from major transportation and commerce arteries such as I-5 and CA-99 and particulate matter pollution from all the agricultural activity in the Central Valley. That just felt crummy. Here I am in a class with people from all over the world from places like San Francisco, Hong Kong, Singapore, Seoul – you name it!  While their cities were lauded as examples of forward thinking and progress, their first exposure to where I’m from was through this case study that pointed out how terrible the air quality was there. It felt bad seeing that as our claim to fame. I sunk into my seat that day. But that day also made me want to do something—anything—to help change that perception.

I chose to forego a research job up in Napa and Sonoma County vineyards to look for something in the environmental justice realm closer to home. I had trouble finding work, even with a bachelor’s degree from Cal, but I was determined to stay and help. Months went by and no luck. I could see why the massive brain drain trend happens in places like the Central Valley. Young people don’t have many options or opportunities, so when they leave for college, they tend to leave for good. My first gig ended up being as a warehouse worker at a cold storage facility packing and packaging grapes for export. It took a bit of pride swallowing, but I ended up having a great time and meeting many inspiring, hard-working people there. in CSD’s

Fortunately, I found out about an open position at the Community Water Center (CWC), a nonprofit dedicated to ensuring all Californians have access to safe and affordable drinking water. A large portion of my work was organizing, advocacy and Agua4All outreach work. Agua4All is a program The California Endowment started in collaboration with RCAC, CWC and Pueblo Unido Community Development Corporation to increase access to and consumption of safe drinking water in schools and communities through installing water bottle filling stations, and providing reusable water bottles and interim treatment solutions where necessary. The pilot project launched in Arvin. I worked closely with RCAC during the Agua4All work so I eventually made the jump from CWC to RCAC. I worked with RCAC staff members Lee Schegg, Randy Vessels, Dave Wallis, and Sarah Buck to get the Arvin Interim Solutions project off the ground. We ran pilot tests, installed arsenic removal filters and protective cabinets for the first phase of the interim solutions project. We also developed the manual that was used to operate the units up until this year! I eventually took over the data management and quality assurance role and made sure all the lab tests were negative and that the filters were running effectively. All in all, we managed over 170 filters at multiple sites all over Arvin including all of the schools, the parks, health clinics and more for several years. It was a very rewarding position as I got to visit the sites and build an even closer bond with my community. I even had to run around and sample the filters for 1,2,3-TCP. 1,2,3-TCP, which at the time was an unregulated contaminant, an agricultural byproduct that was known to cause cancer and other negative health impacts. The data was used establish the 1,2,3-TCP thresholds for the filters used to remove arsenic that had already been installed. I spoke in front of the California State Water Resource Control Board (SWRCB), California’s regulatory agency, during the TCP MCL setting process, again citing my work with the Arvin Arsenic Mitigation project. The project has had a huge impact on not only my life, but thousands of people’s lives as well.

But here I was in 2021, with the EPA Compliance letter in hand. Arvin did it. They got the job done. After years of interim solutions, in the end they succeeded in drilling six new production wells, built a new million-gallon water tank, and brought thousands of feet of new pipelines online, implementing a long-term solution to provide safe water to the entire community.

With all this in mind, I headed over to the announcement ceremony on Oct. 12 with some general ideas of what I wanted to say. I was greeted by many big names in the water regulatory world from the federal, state, and local levels. I shared the stage with Joaquin Esquivel (SWRCB Chairman), Deborah Jordan (EPA Regional Administrator), Dee Jaspar (lead engineer for the project), the Arvin CSD Board and their general manager, representatives from Congressmen Rudy Salas and David Valadao’s offices and State Senator Melissa Hurtado herself. They all spoke eloquently about the project, the funding details, the technical ups and downs, and even touched on the interim solutions projects RCAC helped implement

By the time it was my turn to speak, there wasn’t much for me to add on the project itself. So I ended up sharing this story.My story. And I ended up getting emotional up there on the podium reflecting on all of it, thinking about how my friends and family, many of whom still live in Arvin, no longer need to worry about the water. Being able to help ensure that peace of mind for them felt very, very rewarding. Seeing the local Arvin CSD Board members receive accolade upon accolade that night from state and federal leaders also instilled a great sense of pride in my hometown. The evening was a huge success. Raul and Joaquin even came over to have a celebratory dinner at my parent’s place!

I hope that this whole 13-year, $20 million project not only restores the people’s faith in the drinking water, but also restores their faith in the democratic process. The system gets a lot of flak for ineffectiveness. But this small town proved that with a lot of hard-work, patience, and teamwork, good things are still very much possible. It just takes having the right people and attitude in place. This was a unified effort from the bottom up for the community. The community, local water board, state and federal regulators, and numerous technical assistance providers all came together to make it happen.

And who knows, maybe now some intro-level environmental science courses out there will start sharing this Arvin case study instead!