Water rates are tricky, especially when a well-established water system has no rate structure in place. A rate increase is a tough sell to any community, and it often fails to win support. This article looks at how one small tribal community addressed water rates and ultimately succeeded.

The Challenge: How do we fairly and accurately charge both businesses and private homes for water consumption?

The Answer: We need to perform a rate study. 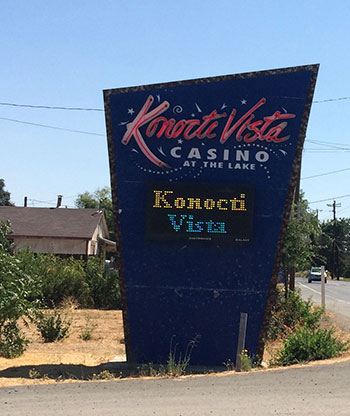 The Big Valley Rancheria is a federally recognized tribe with approximately 171 acres of land located in Lake County, California. The tribe has about 170 members who live on the reservation. The landscape includes vineyards and orchards and is set on the banks of Clear Lake, which is known for its massive black bass. The area is popular with boaters, fishers, hunters, and other nature lovers, which the tribe welcomes. Visitors can enjoy the lake and shop at the reservation, stay at the hotel or RV Park, and visit the casino. Still, providing a safe and adequate supply of drinking water comes as both an economic challenge and one of great environmental concern.

The Big Valley Rancheria Water District operates a proactive tribal water utility serving Rancheria members. The idea is to plan ahead, adjust, and adapt before problems arise. The district also monitors its sole drinking water source, the Tribal Drinking Groundwater Well, for overuse and potential environmental impacts. An overused water source can be detrimental not only to the immediate user, but also to the surrounding water users. Even prior to the present drought and prolonged hot weather, the tribe felt that it needed to limit usage and extend water conservation programs to protect its sole water well. But how would fair rates be set with so few individuals and service connections to charge? Laying the groundwork would be critical. For several years, lead operator for the tribe’s water system, John C. Cruz, Jr., monitored residential water usage and offered assistance with leak repairs. “It is important to me that we set up our next generation with the tools (rate structure) and mindset (conservation) of our most precious resource for years to come,” says Cruz.

This record keeping, however, didn’t just stop there. For several years, the tribe kept comprehensive and accurate water usage records. These records covered the hotel, casino, RV Park, and even the water treatment facility where some of the precious water was used to backwash the filters that cleaned the well water. The tribe left no stone unturned when it came to mapping out consumption. It even closely estimated and monitored the flushing of hydrants. This was daunting work and it wasn’t without trial and error, but it was understood that a rate study would be vital to conserving this precious commodity.

The Process: Early in 2013, the Big Valley Rancheria Water District staff asked RCAC to help perform a rate study and together they quickly recognized that the tribe lacked economy of scale. If you understand economics, then you understand that size matters. There were simply not enough customers to fund the water utility’s operation and maintenance. The tribe delivers water to approximately 38 homes and three businesses. The District’s water treatment plant removes iron and manganese, which are unacceptably concentrated in the source water. Without such treatment customers can see it in the water and it will stain fixtures. This operation is expensive to maintain and requires electricity, chemicals, filtration media, and diligent certified operators. But with so few consumers to bill, how could the tribe pay to treat the water and maintain the system?

Discussion between the Council, utility, and tribal members followed for several weeks with mixed results. RCAC completed the rate study documents and provided them to the Public Works Manager and Assistant Environmental Director, John Gichuki, but for a time, received no response. As the silence continued for some time, it was thought that perhaps the rate study had stalled somewhere in the delegation process. With the water consumption data and a rate study in hand, the tribe could now justify that a rate structure, in some form, was necessary.

The questions poured out: How was it received? What has happened to water usage?

Gichuki reported that the initial reaction was encouraging. Rather than opposing rates, tribal members wanted to know how they could further conserve water. They had understood the importance of conserving even prior to California’s current drought, but in disseminating the study data that pointed to the benefits of a fair rate structure, there were immediate requests for low-flow toilets, shower heads, faucets, and even low flow nozzles for outside hoses. The study revealed many leaky fixtures, and the maintenance department quickly responded by replacing the fixtures with low-flow versions. The first official reported result to RCAC was the “lowest January water usage in the tribe’s recorded history.” What a success for the Tribal Governance Council!

Since the Initial Impact: The tribe’s water operator, Cruz, said recently that despite a dry and hot summer, less water is being used. The water team checks and records well drawdown and recovery levels on a regular basis. The tribe might be worse off had it not organized the tiered rate structure leading the way toward diligent water conservation.

Looking to the Future: With a fair rate structure in place and conservation on everybody’s mind, what’s next? What can the tribe do to further conservation and protect its invaluable water supply? There are no guarantees, but rates that support water conservation, along with a well-informed customer base, are an enormous step in the right direction. With no foreseeable drought relief in California, these resource-saving measures are essential.

To the readers of this article: If you live in any area with the potential for droughts and flooding, follow the Big Valley Rancheria model. Both the utility and its customers need to be informed and prepared well in advance of extreme weather. Planning and implementation resources are available through your regional RCAP, primacy agency, or your own personal research. Be realistic about your water usage and practices at home, at work, and during travel. Learn to conserve.

RCAC is the Western RCAP